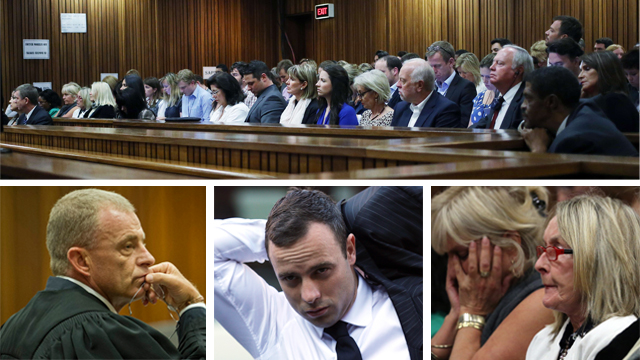 Oscar Pistorius has told his murder trial that girlfriend Reeva Steenkamp did not scream or shout as he grabbed a gun and fired shots that killed her.

Prosecutor Gerrie Nel said it was "improbable" that she would stand in the bathroom saying nothing while Mr Pistorius was just 3m (10ft) away shouting at her to call the police.

Mr Pistorius said he could not explain why she had not shouted out.

The athlete, 27, denies murder saying the killing was a terrible accident.

Pumza Fihlani BBC News, Pretoria
Oscar Pistorius has been on the stand for an entire week - but the back and forth of cross-examination is where testimony is tested and concessions are made.
"What would a reasonable person do?" This was one of prosecutor Gerrie Nel's questions. The answer could be the difference between negligence and intent - although we're not quite there yet.
As he was preparing to wrap up for the day, Mr Nel accused the athlete of creating a version of events that did not happen. "She had nothing to be scared of except you," Mr Nel charged, but the accused denied this.
The prosecutor pointed out that Mr Pistorius was making "mistakes", a point the judge also noted. The court would not accept his explanation that the mistakes were a result of him being tired.
The state has alleged that the pair had an argument in the bedroom and she ran away from him. We don't have any indication of how the state plans to prove this. Neighbours have testified to hearing "loud voices".

He admits killing Ms Steenkamp but says he fired his gun after mistaking her for an intruder.

He believed she had been in bed when he grabbed his gun, made his way to the bathroom and fired shots through the door.

The prosecution says he deliberately killed her after an argument.

On the third day of his cross-examination, Mr Nel pressed the South African Olympic sprinter to explain the final moments leading up to the shooting.

He asked why he had not checked whether Ms Steenkamp had heard his calls for her to phone the police, or why he had not taken her to safety instead of going to confront the supposed intruder.

Mr Pistorius said it was his personality to confront what he believed was an intruder.

The trial has been adjourned until Monday morning.
'She was scared of you'
Later, Mr Nel questioned Mr Pistorius's account that he had not heard Ms Steenkamp shout or scream during the whole incident.

"When you shouted at Reeva to phone the police, she was 3m away from you in the toilet, but she didn't say anything," he said. "Why would she not say anything?" 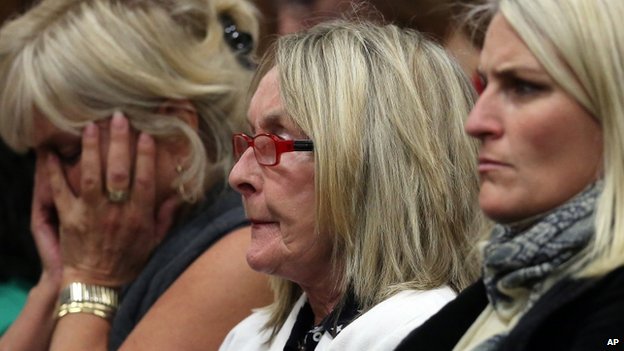 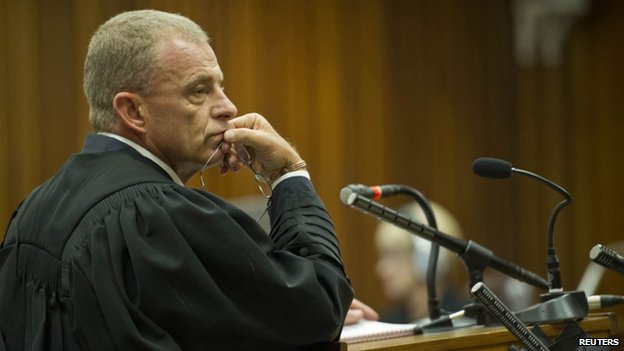 Mr Pistorius said he did not know.

The prosecutor accused the athlete of lying, and said he had shot Ms Steenkamp while she was talking to him from the bathroom. 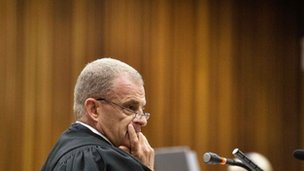 "She wasn't scared of an intruder," he said. "She was scared of you."

He went on: "Are you sure that Reeva did not scream after the first shot?"

Mr Pistorius took a long time to answer, and broke down into sobs.

"At no point did Reeva shout out or scream," he said.

Mr Nel then disputed his claim, saying he would not have been able to hear if he had just fired his gun.

Prosecution witnesses have testified to hearing a woman scream, but the defence disputes their testimony.
'Fixated' on intruder
At one point the judge admonished Mr Nel, telling him not to call a witness a "liar" while he was giving evidence.

The BBC's Pumza Fihlani, at court in the capital, Pretoria, explains that lawyers can say witnesses are lying but not call them liars.

Mr Pistorius told the court he had heard a window opening and closing, and had immediately got out of bed and grabbed his gun.

"I told Reeva to get down and phone the police," he said.

He denies all charges

Mr Nel asked if he had not looked at Ms Steenkamp, or asked if she had heard the noise.

"My whole being was fixated on this person that I thought was in the bathroom," Mr Pistorius said.

Before the cross-examination resumed on Friday, Mr Nel confirmed that Mr Pistorius had asked to meet Ms Steenkamp's family to apologise for killing her.

The double amputee faces life imprisonment if convicted of murdering the 29-year-old model.

If he is acquitted of murder, the court must consider an alternative charge of culpable homicide, for which he could receive up to 15 years in prison.

Mr Pistorius also faces charges of illegally firing a gun in public and of illegally possessing ammunition, both of which he denies.

There are no juries at trials in South Africa, and his fate will ultimately be decided by the judge, assisted by two assessors.