Renting in retirement: How feasible is it?

By Brian MilliganPersonal Finance reporter, BBC News
Home ownership can be a thing of beauty. Just as you don a pair of fur-lined slippers and spend more time on the golf course, you find you have paid off your mortgage.
For the rest of your life, accommodation is effectively free.
But this utopian model is becoming the exception. High house prices mean we are borrowing more for longer.
And more significantly, the UK is slowly ceasing to become a nation of homeowners.
Over the next 15 years the number of people renting their home from a private landlord is expected to double to more than nine million.
So how feasible is it to rent when you are no longer earning a salary?

At the age of 52, Simon Marley - who lives in York - is still some way off retirement.
But having sold his house to boost his pension fund, he accepts that he will have no choice but to continue renting when he does retire.
As a chartered accountant, he's calculated that out of £1,000 a month he expects to get from his pension, up to £700 might have to go on rent.
"It will be an incredibly big burden," he says.
"On current figures the rent will be roughly 70% of my monthly income, which is an incredibly large volume."
To cover the rent he will either have to wait until he gets a state pension at the age of 68, or else do part-time work.
He advises other people to plan for retirement earlier than he did.
"People are not addressing their pension provision early enough, or proactively enough. I can't stress how important it is to tackle it earlier rather than later," he says.
"Don't leave it till your 50s before you realise that you've got a huge black hole that you can't fill."

Simon's case is not untypical.
Within 15 years in the UK, retirees who don't own their own homes will be paying an average of 42% of their income in rent, according to research by Development Economics for Scottish Widows.
But pensioners will face very different pressures in different parts of the country, with some areas proving much cheaper than others. (See chart below)
The projections suggest that renting in London may become untenable for all but the rich.
While retirees in the capital currently spend 66% of their income on rent, they could be spending as much as 80% by 2032.
The next most expensive area for retired renters will be the East of England, where the figure could be 45%.
Just behind that is the South East, where retirees can expect to spend 39% of their pension income on rent.
On the other hand, those in Wales will spend just 24% of their pensions on accommodation, while those in the North East will spend 25%.
So feasibility depends very much on the cost of local rents, and whether you may be prepared to move to a cheaper area.
If you are going to move, think Newcastle, Swansea or Glasgow, says the report, not Eastbourne or Norfolk.

The proportion of pensioners' income taken up by rent is likely to accelerate over the next 15 years, according to the research.
At the moment 32% of the average pensioner household's monthly income of £2,374 is spent on rent.
By 2023 the average income will have risen to £3,706 - but rents will have risen faster, accounting for 42% of income. (See chart below)
All of which suggests that those planning to rent in retirement should consider saving more while they are working.
Or else work longer.
So while pension firms and insurance companies are fond of telling us to save more - to boost their own profits - they probably have a point.
Scottish Widows believes the average renter planning to retire in 15 years' time needs to save £525 a month more than they are saving at the moment.
Or else work for an extra five years.
Either option is a big ask.
"The number of people renting in retirement is set to treble over the next 15 years," says Robert Cochran, retirement expert at Scottish Widows.
"But alarmingly few people are thinking about how they would cover the growing cost of a property lease when they stop working."

State pension age calculator DWP
How much will I get from a state pension? DWP
Combined state, workplace and DC calculator, from Standard Life
How much can I earn from a DC pot? Money Advice Service

If the country builds more houses - and the government's latest target is 300,000 a year - it may be that these projections prove inaccurate.
In theory increasing the housing supply should lower rents.
However many people are perfectly happy to rent after retirement - perhaps because they want to pass on housing equity to their children.
But others - including Simon Marley - worry about the security of renting as they get older.
"Landlords have the upper hand a lot of the time. If someone wants you out with a month's notice, you're done. So there is that sword of Damocles hanging over you all the time," he says.
Yet since Friday 1 December, those taking out tenancies in Scotland have been given extra protection.
Under the Private Housing Act (Scotland), tenants will be able to choose to stay in a home as long as they like - unless they are eligible for eviction on one of 18 grounds.
In last month's budget the government announced that a consultation is to take place about similar rules for England. There may be changes in Wales too.
While that may provide some comfort for those planning to rent after they stop work, many retirees may need to take a very hard look at how they will afford it.
at December 03, 2017 No comments: Links to this post

An Egyptian lawyer has been sentenced to three years in prison for saying that women who wear ripped jeans should be raped in punishment.
Nabih al-Wahsh, a prominent conservative, was also fined 20,000 Egyptian pounds (£839; $1,130).
The lawyer made the remarks on a TV panel show in October, during a debate on a draft law on prostitution.
"Are you happy when you see a girl walking down the street with half of her behind showing?" he said.
He added: "I say that when a girl walks about like that, it is a patriotic duty to sexually harass her and a national duty to rape her."
Mr Wahsh said that women who wore revealing clothing were "inviting men to harass them", and said "protecting morals is more important than protecting borders".
The prosecutor brought charges against Mr Wahsh after a public outcry.
The National Council for Women's Rights condemned the remarks, saying they were a "flagrant call" for rape, in violation of "everything in the Egyptian constitution".
The council has now filed a complaint about the statement to the Supreme Council for Media Regulation about the broadcast which aired on 19 October.
Mr Wahsh has previously called the Holocaust "imaginary" and declared himself a proud anti-Semite.
"If I see any Israeli, I will kill him," he said during a separate TV panel show.
In October last year, Mr Wahsh was involved in a TV studio brawl with a cleric, after the cleric suggested women should not necessarily have to wear a headscarf.
at December 03, 2017 No comments: Links to this post 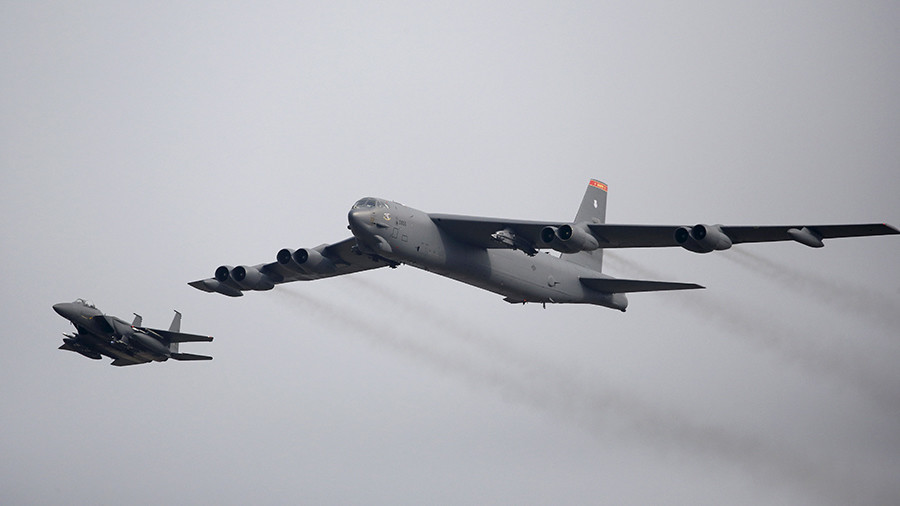 © Kim Hong-Ji / Reuters
1.1K
The leaders of Israel, Saudi Arabia and Egypt all pressurized the US to bomb Iran prior to negotiations on the 2015 nuclear deal, former US secretary of state John Kerry said. He described the proposition as a “trap in lots of ways” for Washington.
Kerry, who chaired the US Senate Foreign Relations Committee before heading the US diplomatic corps in 2013, recalled how he met Saudi King Abdullah, Egyptian President Hosni Mubarak and Israeli Prime Minister Benjamin Netanyahu in his capacity as legislator. All three leaders lobbied him for military action against Iran. “Each of them said to me: You have to bomb Iran, it’s the only thing they are going to understand,” he said.
“I remember that conversation with President Mubarak. I looked at him and said: It’s easy for you to say. We go bomb them and I bet you’ll be the first guy out there the next day to criticize us for doing it. And he went: ‘Of course, ha-ha-ha-ha!’” Kerry said. “It was a trap in a lot of ways. But more importantly, Prime Minister Netanyahu was genuinely agitating towards action.”
It was not clear when the meetings Kerry mentioned took place. He chaired the committee from 2009. Mubarak was deposed in February 2011, while King Abdullah died in January 2015.
Kerry, who was part of a panel of experts at a nuclear weapons reduction forum at Washington National Cathedral on Tuesday, used the occasion to defend the 2015 nuclear deal with Iran, which he helped to negotiate. The deal, in which Russia was also a major negotiator, placed restrictions on the Iranian nuclear industry in exchange for lifting UN, US and EU economic sanctions against Tehran. Kerry said without the deal Saudi Arabia, Turkey, and Egypt would likely be developing nuclear weapons of their own today while a military conflict with Iran would be a very likely possibility.
Read more 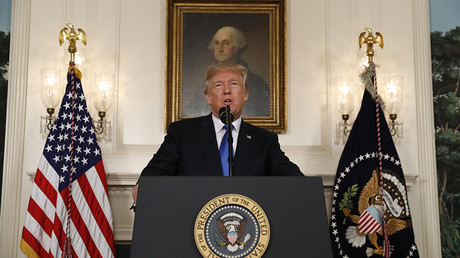 Trump decertifies Iran nuclear deal, imposes 'tough sanctions' on Revolutionary Guard Corps
The former top US diplomat criticized President Donald Trump for trying to undermine the deal. During the election campaign, the Republican nominee repeatedly called the agreement “a bad deal” and threatened to scrap it once elected. “That was a blatant over-simplistic political appeal to the American Jewish community. That’s all what it was, because most of those people hadn’t read the agreement,” Kerry said, adding that the rhetoric had “polluted the water” for American diplomacy.
Trump has since refused to recertify the agreement, arguing that the US got disproportionately few benefits from it, and referred the document to US legislators. The move was criticized by other signatory nations, which slammed Washington for compromising the landmark deal, with Kerry subscribing to it during the panel. Kerry said he was not sure what positive outcome the Trump administration could expect from “giving the nuclear agreement to the Congress to fix,” adding that whatever “fix” was suggested for the deal, it would be perceived in Tehran as “a backdoor effort to kill the deal.”
Kerry suggested that Washington should not make the nuclear agreement hostage to whatever other differences it has with Tehran, be it Iranian missile development, ties with Hezbollah or Houthi rebels in Yemen. He said that the only reason missile-related sanctions against Iran were not lifted under the deal was that then-US envoy to the UN, Samantha Powers, “very cleverly snuck them in at the last minute… and nobody really noticed it.”
Saudi Arabia has lashed out at Tehran on numerous occasions recently, even comparing Iran’s Supreme Leader Ayatollah Khamenei to Hitler. Tehran hit back by saying that it was Riyadh who causes tensions and “wages war” in the region.
at November 29, 2017 No comments: Links to this post