Get short URL
© ilgiornale.it
AddThis Sharing Buttons
497
CCTV footage has caught one of the attackers at Istanbul Ataturk Airport smashing his rifle on the floor in frustration over being unable to find new victims.
The footage released by Il Giornale newspaper shows dozens of people running away after hearing gunshots outside.
The attacker, who was dressed in black and carrying a rifle, is seen entering the building, but finds the airport’s registration area completely empty.
The man then appears to search the area for victims, but failing to find any, throws his gun on the floor in an apparent display of anger.
Forty-four people were killed and over 230 injured in gun and bomb attacks on Europe’s third-busiest airport on Tuesday.
Three suicide bombers first opened fire outside of the terminal to create panic before two of the attackers entered the building and blew themselves up, while the third detonated his explosive device at the entrance.
READ MORE: 13 people, including 3 foreigners, detained over Istanbul airport attack – reports
Turkish police said the three suspected bombers at the airport were citizens of Russia, Uzbekistan and Kyrgyzstan with links to the Islamic State (IS, formerly ISIS/ISIL) terrorist group. The Russian national was reportedly a resident of Dagestan, a region in Russia's North Caucasus.
Yeni Safak newspaper cited Turkish security services who identified the mastermind behind the attack as a Chechen named Ahmed Chatayev. Before joining Islamic State, he was one of the most wanted fugitives from various terror groups in the North Caucasus.
Later on Thursday, a Russian security source told RIA Novosti that Chatayev had been wanted in Russia since 2008 over his links to terrorism.
The source also dismissed Turkish media reports that a man named Osman Vadinov was one of the suicide bombers. "It's not a Chechen surname, and such a person never lived in Chechnya," he said.
One of the organizers of the attack at Ataturk Airport, Chechen national Ahmed Chataev, was known to Bulgarian authorities for terrorist activities, Bulgarian BGNES news agency reported.
Accoridng to the agency, Chataev was born in 1980 and has been wanted by authorities since 2008. There is evidence that he was hiding and lives in Western Europe. According to reports, he was part of a group loyal to Doku Umarov’s "Caucasus Emirate," and after Umarov’s death and the collapse of his group he joined Islamic State (IS, formerly ISIS/ISIL).
Chataev was arrested by Bulgarian authorities, but in 2011 the appeals court did not allow his extradition to Russia.
The suspect was able to travel to Europe and former Soviet states without any restrictions for 13 years, RIA Novosti cited a police source as saying.
at June 30, 2016 No comments: 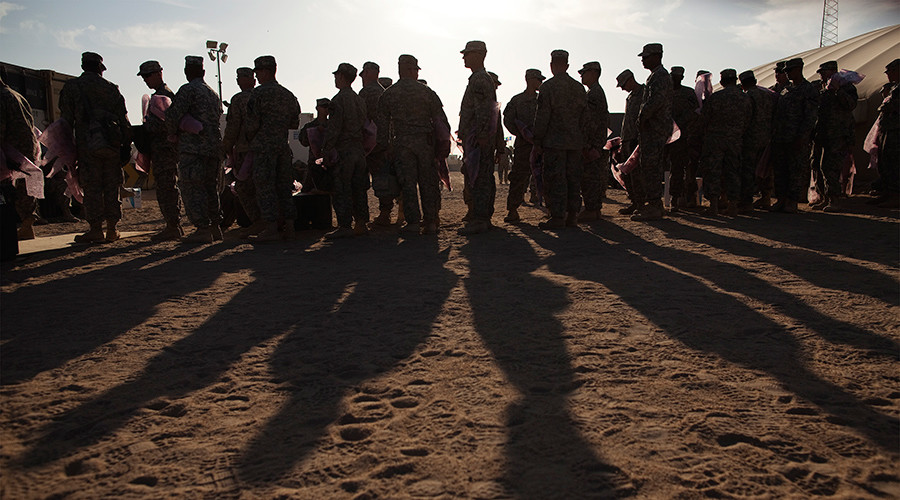 © Lucas Jackson / Reuters
AddThis Sharing Buttons
150
The US military will no longer discriminate against transgender troops, Defense Secretary Ash Carter announced on Thursday. Lifting the ban will involve changing numerous procedures and rules, especially regarding providing medical care.
"Effective immediately, transgender service members will be able to serve openly and can no longer be discharged or separated from military just for being transgender," Carter said during the press conference.
READ MORE: House committee backs requirement for women to register for draft
The change has been in the works for a year. Top brass had raised concerns about how to deal with medical, housing and uniform issues for troops who are transitioning to the other sex, but ultimately agreed with Carter on the change.
“As a matter of principle. Americans who want to serve and can meet our standards should be given an opportunity to do so,"the secretary said.
Carter said that the military's personnel system will be changed so that service members can update their gender if they transition.
The military will also pay for the costs for service members who want to undergo gender reassignment, assuming that their doctors deem the procedure medically necessary and that the transition won't interrupt with military readiness.
"Providing medical care for transgender employees is standard in the public and private sector alike," Carter said, adding that a large number of health insurance plans today cover the costs of a gender transition.
However, Carter said that, to join the military, a transgender person would have to have been of a certain gender for at least 18 months.
The Rand Corporation was tasked with analyzing data and studies about transgender people in the military, and concluded that the medical costs of transitions for to the Pentagon would be minimal.
“We looked carefully at what lessons could be learned from the outside: at least 18 countries allow transgender personnel to serve openly" Carter told reporters. "We were able to study how they dealt with the issue."
Carter said that the policy would be effective immediately to prevent any service members from being discharged just for being transgender. The implementation of deeper changes, such as training personnel on transgender policy and retooling access to medical services to become inclusive to transgender troops, are set to be completed over a 12-moth timeline.
“Deliberate and thoughtful implementation will be key. I and senior members of the Department will be ensuring that all points in this study will be addressed in implementation,” Carter said.
at June 30, 2016 No comments:

Russian President Vladimir Putin has lifted curbs on tour firms selling holidays in Turkey, brought in after a Russian jet was downed last year.
The move was announced in a decree (in Russian), in which Mr Putin also ordered trade talks with Turkey.
The ban on charter flights hurt the tourist industry in Turkey, a favourite destination for many Russians.
The Kremlin accepted a letter from Turkish President Recep Tayyip Erdogan as an apology this week.
Mr Putin spoke to Mr Erdogan by phone on Wednesday, telling him he planned to lift the travel sanctions.
The lifting of non-travel trade sanctions will depend on the outcome of the trade talks, the Russian leader said in his decree.
Mr Putin also condemned Tuesday's gun and bomb attack on Istanbul's Ataturk airport, one of the busiest in the world.
Mr Erdogan had expressed "regret" earlier this week to Mr Putin and to the family of the Russian pilot killed in the incident.
The fighter jet was shot down near the Syria-Turkey border in November. Turkey said the jet had been warned repeatedly after entering Turkish airspace, a claim fiercely denied by Russian officials.
Mr Putin said he had been stabbed in the back and accused Mr Erdogan of collaborating with so-called Islamic State.
Russia responding by hitting Turkey with a raft of sanctions, stopping the Russian package holidays and banning the import of Turkish foodstuffs.

Shot out of the sky: What happened

The Russian Su-24, an all-weather attack aircraft, was flying in skies above the Turkey-Syria border area on 24 November when it was shot down by Turkish F-16s.
The plane crashed in the mountainous Jabal Turkmen area of the Syrian province of Latakia, killing the pilot.
A Russian marine involved in a helicopter rescue attempt was killed when the helicopter came under fire from local fighters.
The navigator in the jet, Capt Konstantin Murakhtin, survived the crash and was taken to Russia's Hmeimim airbase in Latakia by Syrian government forces.
Turkey said planes were warned 10 times during five minutes via an "emergency" channel and asked to change direction.
The Russian defence ministry insisted that the aircraft remained within Syria's borders throughout its mission and did not violate Turkish airspace and received no warnings.

Some believed the temple was created by aliens!

Loise.Wepukhulu 5 hours ago 5653
Some of the archeological discoveries are plain shocking. This temple is 1200 years old, and it was carved from the solid rock. How the heck did they do it?

This one is called a Kailasa temple, and it is found in the west of India. This Hindu temple is unusual and impossible. It locates 34 monasteries on its territory amounting to two kilometers. The temple itself is 50 meters deep, 30 meters high and 33 meters wide.

READ ALSO: Might these be the signs from God telling us He is coming soon?
And it’s a monolith! This means the temple is one of the hugest monolith constructions in the world and mind you, it was built over 1000 years ago! How could they possibly make something like that?! Huge pillars at the entrance are also carved from solid rock.

The whole thing may weigh over 400 000 tons. Scientists believe it took them centuries to build the amazing structure. All the walls are magnificently crafted with great care.

READ ALSO: He got bees on his tale – 20 000 swarm chasing a car!
It seems like they started to build the temple back in the 3rd century, but they finished it up only in the 8th centuries, 500 years later. No one knows who or how has built the temple. Could the ancient people erect it using just simple tools, such as picks and hammers?

They apparently lacked the technology to do it. Some even believe the place was built by aliens. Well, we do not know that for sure, but the structure is rather striking, and it’s hard to believe human hands have crafted it out of sheer rock.
at June 30, 2016 No comments: