Raila Odinga attacked after hosting a Lodwar Family in his office

Tonny Ndungu 2 hours ago 15553
–Opposition leader Raila Odinga hosted a 2-year-old girl at his Capitol Hill offices- the girl is named after his wife Ida Odinga
– The family reportedly travelled from Lodwar for the meeting with Raila and was later seen in photos that circulated online, trekking to Umoja estate
–  Politicians mingling with the common people has been seen as a smart PR move of gaining popularity with the common folk ahead of the 2017 General Election
According to information dispensed by the Coalition For Reforms and Democracy (CORD) critics, the family that Raila Odinga invited to his Capitol Hill office might not have been from Lodwar after all.
READ ALSO: Raila Odinga hosts girl named after his wife
Raila had hosted the family at his office after meeting them in Lodwar during the past visit. The family has such love for the CORD leader that they named their eldest daughter Ida Odinga- after Raila’s wife.
The family, in respect to CORD and reverence to the CORD leaders  wore outfits that matched CORD’s orange hues. The woman was dressed in a two-piece ankara-gown as was the little girl. 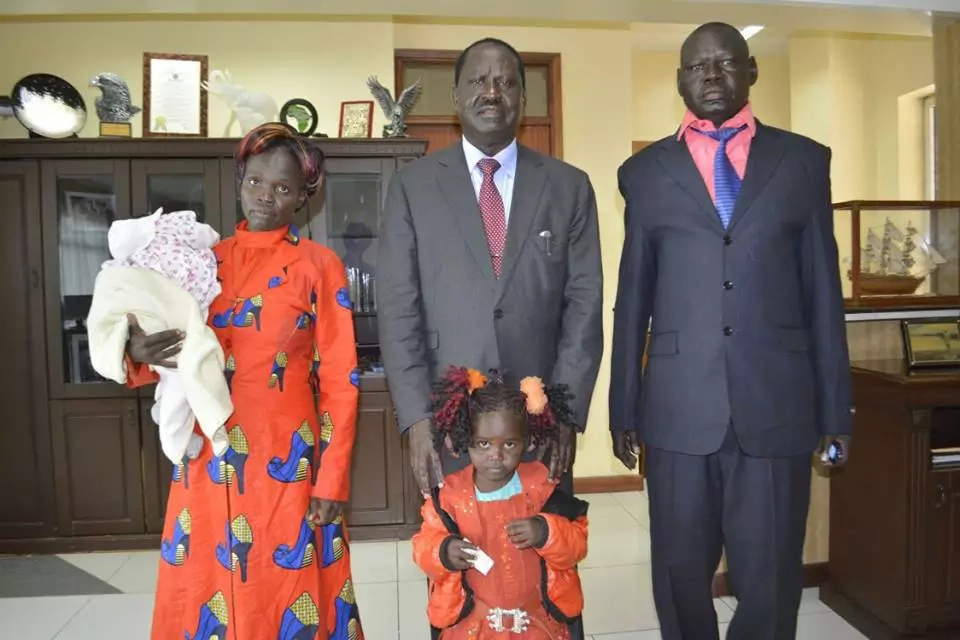 Agnes Lokidor Mukono, Raila Odinga, Ida Odinga (jr) and Michael Mukono Ekalale
Their father settled for a charcoal grey suit. With an orange shirt inside.
READ ALSO: Raila Odinga spends time with grand-daughter in his office
The family had travelled all the way from Lodwar to the country’s capital to meet Raila according to the information that was shared on Raila’s social media pages.
This was the second time that Raila is hosted a child in his office. A week ago, he was pictured spending  time with his granddaughter as she learnt to scribble.
Raila’s latest trend is a mirror of President Uhuru Kenyatta’s fondness of welcoming children to State House and have them see how it looks like- this has not augured well with Jubilee adherents attacking the CORD leader for ‘fake show of affection’ or PR. 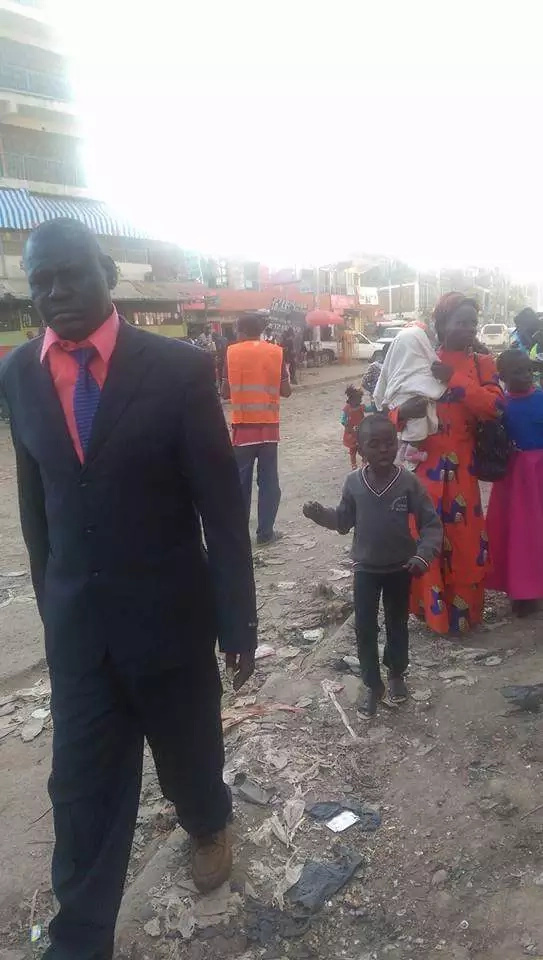 The family after meeting the CORD leader, trekked home. Critics argue that the family might not have had enough bus fare
In photos that were later shared after the family met Raila, the couple was spotted  trekking from the Central Business District (CBD) to Umoja 1.
Speculations abound that the family might not have had enough fare to take them back to Umoja estate.
READ ALSO: See photos of the Raila’s house that everyone is talking about
On whether the family was indeed from Lodwar, bits of information that we managed to pick online have it that the family did come from Lodwar and was setting camp with Relatives in Umoja before heading back home.
Politicians freely mingling with commoners , many argue, goes a long way in  garnering political mileage ahead of the 2017 polls.
It is perceived as a sign of humility and kindness when a high ranking politician mingles freely with members of the public.
Cover Image: Nation.co.ke
at June 28, 2016