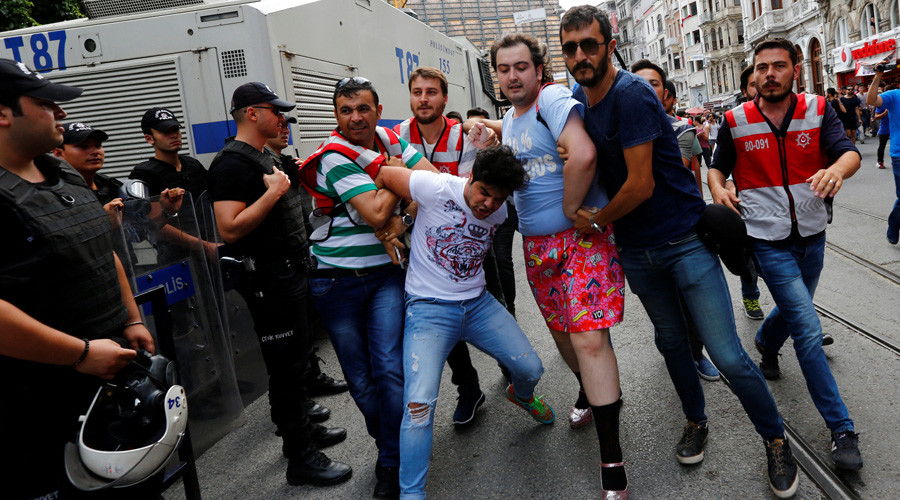 Plainclothes police officers detain LGBT rights activists as they try to gather for a pride parade, which was banned by the governorship, in Istanbul, Turkey, June 26, 2016. © Murad Sezer / Reuters
AddThis Sharing Buttons
104
Police have deployed tear gas and rubber bullets in central Istanbul to disperse dozens of activists who gathered to mark the annual Gay Pride week, despite an official ban issued by city authorities. Some 15 people were detained, protesters said.
The Gay Pride march, organized by the LGBTI Solidarity Association, which has taken place every year since 2003, had been called off on Friday in a Facebook post from organizers, due to the ban. The Istanbul governor's office last week said the march had been banned out of concern for public order.
Still, on Sunday dozens of activists holding placards and rainbow flags came to downtown Istanbul to declare their right to rally.
They planned to make a statement at iconic Taksim Square at 5 pm local time, but officers at the scene reportedly told protesters they would arrest anyone who tried to make a statement.
Hundreds of police were deployed near Tunel and Taksim, the meeting place for the marchers.
Terry Reintke, a member of the European Parliament who also took part in the events, was briefly detained, but then freed to go. She tweeted that some 15 more people have been detained, mostly Turkish activists. Later tweets stated up to 19 were detained.
Police shut some of the central side streets to traffic in order to have better control over the area.
Authorities stated security concerns when explaining the formidable police presence, as Turkish ultra-nationalist youth group the Alperen Hearths threatened to disrupt the rally a week before.
Last Sunday, June 20, Istanbul riot police also used tear gas and rubber pellets to disperse a march held in the city for transgender people, which had also been banned.
READ MORE: Turkish police use tear gas, rubber bullets to disperse LGBT rally in Istanbul
Although, unlike some other Muslim countries, homosexuality is not a crime in Turkey and gay parades have been held here before, homophobia is still widespread. This year Gay Pride Week also coincides with the Islamic Holy month of Ramadan, a fact that would certainly lead to controversy in Muslim Turkey.
at June 26, 2016