Raila tells Ababu Namwamba to respect the party or leave

Edward Chweya 3 hours ago 15417
– The ODM Central Committee met Wednesday, June 29, to discuss the grievances raised by Ababu Namwamba
– At the committee chaired by Raila Odinga, Ababu was given a two-week ultimatum to table his grievances or quit the party
– Raila expressed his displeasure at the media outburst Ababu and his colleagues made two weeks ago
– He read out the Riot Act to the secretary general and told him he is free to leave if he cant follow the procedures
– Raila also castigated Ababu for missing key party events notably the anti-IEBC demos
READ ALSO: Private meeting with Raila demanded to solve W. Kenya issues
Orange Democratic Movement (ODM) party leader Raila Odinga has given embattled Budalangi MP and the party’s Secretary General Ababu Namwamba two weeks to mend his mess or leave the party.
Sources privy to the party’s Central Committee meeting that took place on Wednesday, June 29, at Orange House indicate that Raila took issue with the media outburst by Ababu, party deputy chairman Paul Otwoma and a number of other leaders from Western Kenya.
The opposition leader took Ababu to task to explain why he chose to address the media when he felt aggrieved and sidelined in the party instead of following the laid down procedures which include presenting his grievances to the committee. 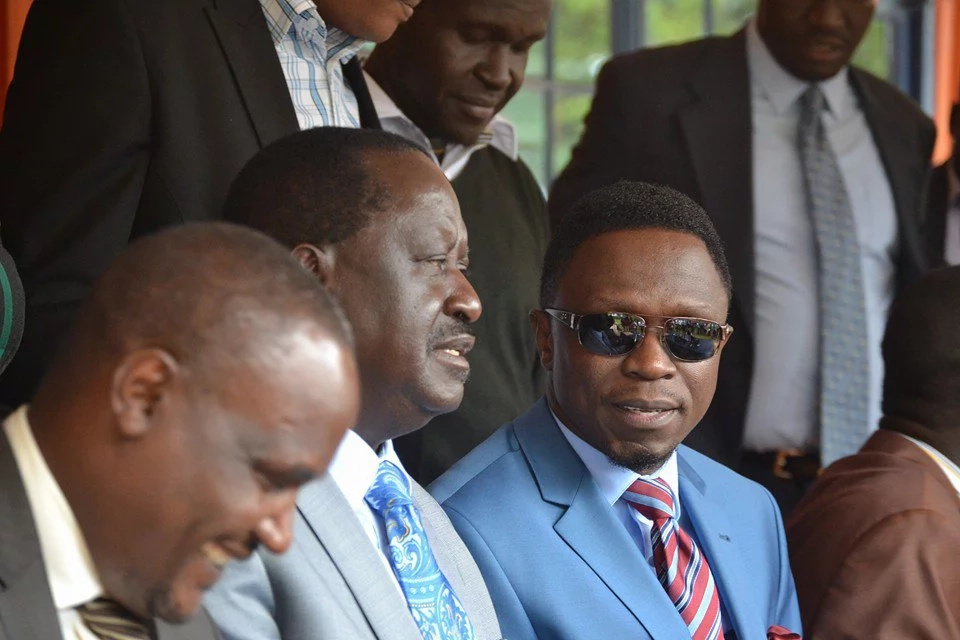 Ababu Namwamba chats with Raila Odinga before addressing the media following a meeting of the ODM Central Committee. Raila told Ababu to mend his mess in two weeks or leave the party. Photo: Raila Odinga/Facebook.
Raila also blasted the secretary general for his continued absence from the party affairs, notably the anti-IEBC protests and the media briefings when businessman Jacob Juma was murdered.
Efforts by Ababu to reach out to Raila in person and hand in his grievances proved futile as the former prime minister gave him and his rebel MPs a two-week ultimatum to put them together and present them in the next meeting or just quit the party.
This was followed by Raila reading out a Riot Act to the legislators in a bid to remind them the stipulated measures to be taken should they not follow the right procedures.
However, Raila also acknowledged that Ababu’s grievances are genuine and should be looked into and solved amicably.
READ ALSO: ODM denies sidelining Ababu Namwamba
He then allowed him to address the media after the five-hour meeting.
Two weeks ago, Ababu and nine other Western Kenya MPs called a press conference and threatened to look for another option should the sidelining continue in the ODM.
The legislators castigated Raila and party Chairman John Mbadi for ignoring them during their visits to Western Kenya, something they said they did not take lightly.

“As ODM leaders from Western Kenya, we reject the persistent habit in our party to treat us as second rate members. Certain forces within ODM have formed this habit of bullying, intimidating and wrongly profiling us for no good reason,” the statement read in part. 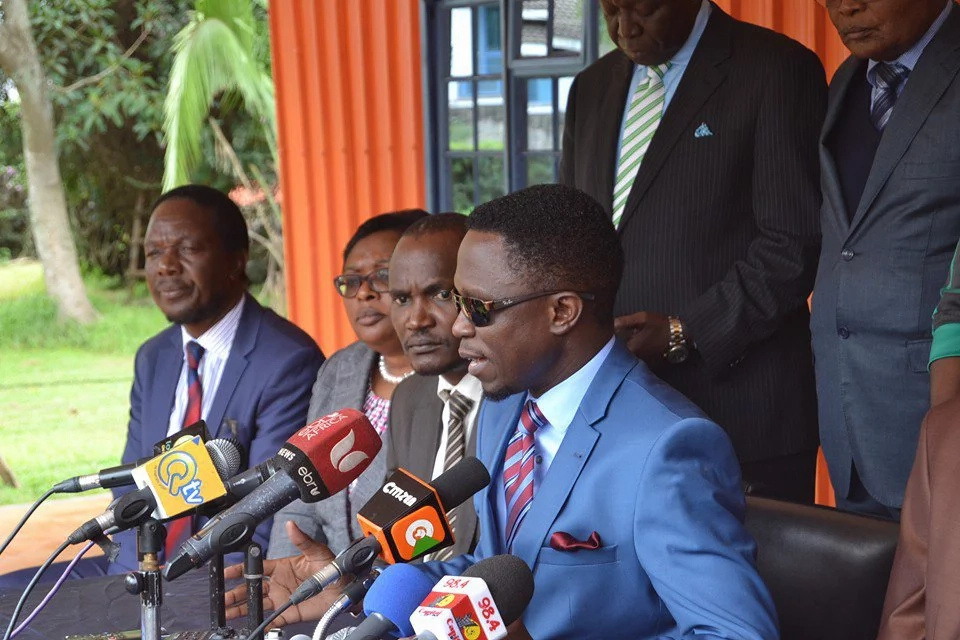 Ababu Namwamba addresses the media after attending the ODM Central Committee meeting that was deliberating his recent fallout with the party leaders. Ababu was told to mend the mess or quit. Photo: Raila Odinga/Facebook.

“Only last weekend the party leader was in Kakamega and Vihiga without notifying area MPs Wilbur Ottichilo and Chris Omulele. Last month the chairman was in Khwisero purportedly unveiling the party branch leadership without the area MP Andola. We do not take this disrespect kindly,” they said further.

A section of the ODM has accused Ababu of going to bed with the Jubilee coalition and planning to ditch the opposition ahead of the 2017 polls.
However, he has denied the claims saying he is in ODM to stay.
Raila had early only defended Ababu in a rally in Busia by saying he still remains ODM’s secretary general despite attempts to oust him.
Meanwhile, former Lugari MP Justus Kizito has urged Ababu and his colleagues to leave ODM and join Jubilee.
Kizito said that the writing is on the wall that ODM does not want leaders from the Luhya community and went on to cite the cases of Musalia Mudavadi and DP William Ruto.

“Ababu and Otuoma ought to have known by now that ODM leader Raila Odinga does not have any respect for Luhya leaders and this started way back with the late Wamalwa Kijana,” Kizito said as quoted by Star.