Aden Duale accused of being Ruto's lap dog by Junnet

– Suna East MP Junnet Mohamed has savagely blasted National Assembly majority leader Aden Duale
– In a video that has gone viral the Suna East MP claims Duale has no authority to call himself a majority leader as he was elected with just 9000 votes while his MCA in Suna got 15,000 votes
– Junnet also accused Duale of being a lap-dog of Deputy  President William Ruto
Suna East MP Junnet Mohamed has viciously teared into National Assembly Majority leader Aden Duale.
Speaking in Busia on Monday,June 27, during the homecoming of Busia Woman Representative Florence Mutua Junnet said Duale does not deserve the title of majority leader.
Junnet said Duale was elected to parliament with just 9000 votes while in Suna his Member for County Assembly had 15,ooo votes.

“Between Duale and my MCA who should be holding a bigger post,” Junnet said. 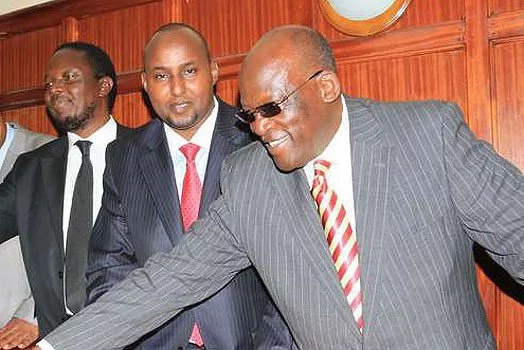 Junnet Mohammed in court together with other accused leaders, the leaders were later released on bail by the court.
READ ALSO: Uhuru’s take on DP Ruto’s 2022 presidential bid
Junnet also accused the Garissa township MP of being Deputy President William Ruto’s lap-dog.
The Suna East MP said wherever  Ruto goes he has to be with Duale.

“He Ruto moves from church to church with his bible we cannot even tell his religion and everywhere he goes he is with his dog Aden Duale,” Junnet said.

Junnet said Duale was busy barking like a dog suffering from hunger for eight years. 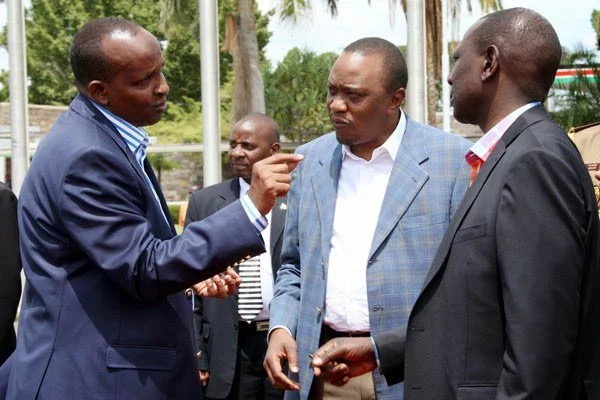 Aden Duale, Uhuru and William Ruto, Duale is accused of being Ruto’s lap-dog Photo: Standard
READ ALSO: CORD wants DP Ruto arrested for hate speech
Junnet and Duale have recently started war of words after the Suna East MP accused the majority leader of ordering his arrest over hate speech remarks.
Junnet said Duale with the assistance of high ranking government officials had organised his arrest and those of other Coalition of Reforms and Democracy (CORD) politicians.
READ ALSO: Junnet blames Aden Duale for his troubles
Cover photo: Nation
at June 28, 2016