Tuko.co.ke Gossip Blogger 2 hours ago 15776
– A senior official at KDF has been reprimanded on the grounds that he leased his official uniform to a third party contrary to the set rules of conduct
– His girl, word has it, wore the uniform, took photos and posted  them online as an attention seeking gimmick
– On such, the in-house expert advises that the person who wore the uniform should be charged for impersonation
A senior official of the Kenya Defence Forces (KDF) has been suspended after his girlfriend, unbeknownst to him, wore his clothes in his absence, took photos and posted them online.
READ ALSO:  AMISOM forces kill six al-Shabaab commanders including Kenyan trainer
The pretty girl’s photos went viral on Facebook as most of the people who re-shared them thought that she was an officer like many others. That is where the  tale about impersonation came in.
When the photos go the attention of the officer’s superiors and the uniform was identified as his, it is alleged that he was called in and had a long sitting with his bosses. 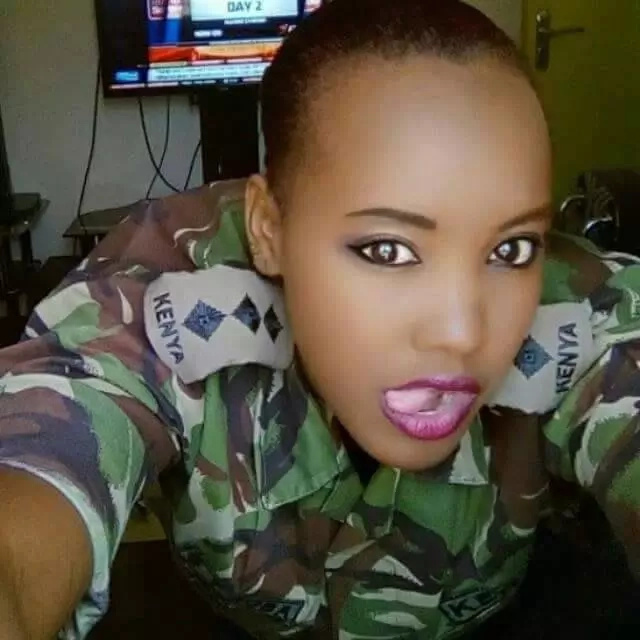 The girl who is alleged to have caused the suspension of a KDF captain when she borrowed his uniform to take photos with.
Unconfirmed reports have it that the officer was suspended  from active duty for leasing out his official military regalia for wrong use- in this case, social media.
READ ALSO: Al-Shabaab release 48-minute propaganda video about El-Adde raid
TUKO.co.ke however established that there is no  rule in the books that would have a KDF Captain suspended because his wife wore his uniform and posed for photos.
Action would only be taken if the said uniform was leased for use in criminal activities or any  related activity that would contravene what is generally accepted as right.
Hot Kenyan police officer of a few days ago says that he is  in trouble with his superiors. A spate of his photos presumed to be attractive by the Kenyan female populace broke the internet with scores of women demanding to be arrested by him.
READ ALSO: Photos: Kenyan women on social media go wild over a ‘hot’ male police officer
He has since been identified as, Steve Karisa. An administration police and an ardent gym addict.
When speaking to Word is on an interview, the police officer said that his instant fame engendered trouble with his bosses who are particular with media attention.
Cover Image:
at June 28, 2016