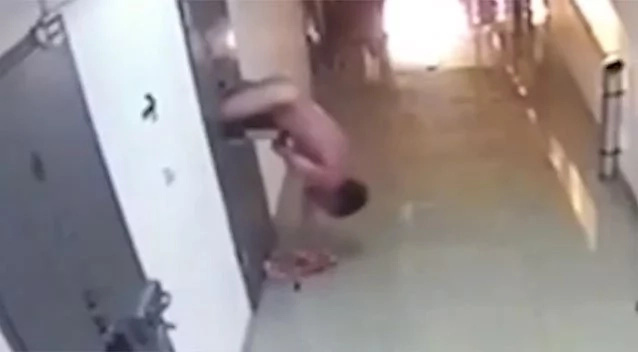 The almost naked prisoner slithers himself through the tiny food hatch in the door head first
Rustam Shakhrutdinov, aged 25, was dubbed a “snake man” after his prison break attempt wenr viral worldwide.
READ ALSO: Victor Wanyama visits prisoners at Kamiti Maximum Prison (photos)
Before pushing his way through the tiny hole in the door the young man removed his clothes to be more smooth.
At one point the accused robber seems stuck halfway but eventually manages to set himself free — he slides out of the slot and sucessfully on lands on the floor. 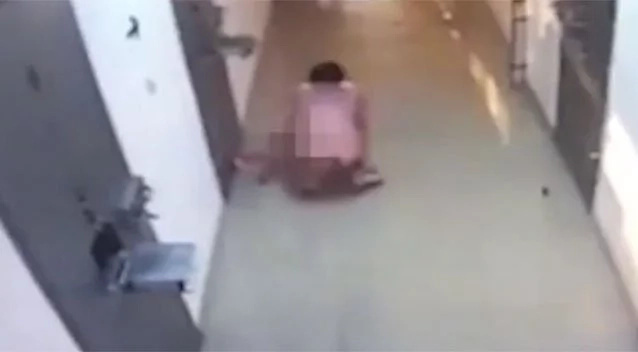 When the ‘snake man’ is free, he dresses in the clothes he pushed through the food flap earlier
Next moment the slippery criminal grabs his clothing and shoes he provideltly left on the other side of the door.
He is then seen putting them on and casually walking off down the corridor.
READ ALSO: 90 years in jail for teacher who defiled pupils
It is still unclear if the Russian snake-man managed to made his way out of the detention facility or whether he was re-caught.
The clip showing grand escape has been viewed more than 63000 times in 24 hours and counting.
Watch video:
Even more desperate attempt to gain freedom was made by an inmate who tried to escape jail through the toilet and got stuck in its sewerage pipes.
at June 28, 2016