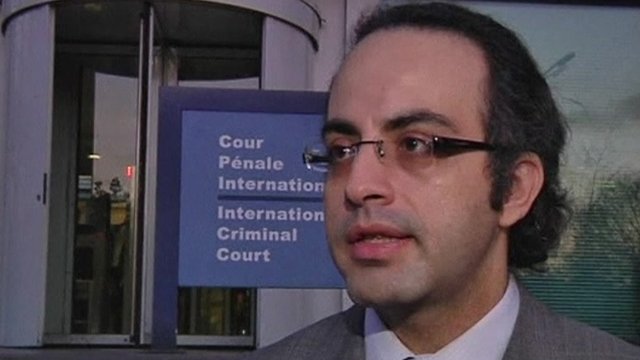 Former Ivory Coast President Laurent Gbagbo is facing four charges of crimes against humanity, the International Criminal Court (ICC) has said.
He is accused of being an "indirect co-perpetrator" of murder, rape, persecution and other inhuman acts.
Mr Gbagbo, 66, was placed in detention in The Hague early on Wednesday after being flown from Ivory Coast.
He is the first former head of state to be detained to face trial in The Hague by the ICC since its founding in 2002.
Human rights groups have welcomed his arrest, but also cautioned against "victor's justice".
Continue reading the main story

John JamesBBC News, Abidjan
There is a palpable sense of shock on the streets of Ivory Coast's main city, Abidjan, following the transfer of ousted President Laurent Gbagbo to The Hague to face charges of crimes against humanity.
True, President Alassane Ouattara had been firm since he took power in April that Mr Gbagbo would face justice at The Hague, and those close to him worked hard to make sure the transfer happened before the 11 December legislative elections.
But there was always a hope among Gbagbo supporters that things would eventually be settled through some sort of deal that would set judicial questions aside in a bid for reconciliation.
"Adieu reconciliation" reads the front page of Notre Voie, the official newspaper of Mr Gbagbo's Ivorian Popular Front party, which printed a black front cover on Wednesday morning.
There are fears a perception of this could stoke further tensions in Ivory Coast, says the BBC's Anna Holligan in The Hague.
'Widespread and systematic'
The ICC has been investigating four months of conflict in Ivory Coast, which began when Mr Gbagbo refused to give up power to Alassane Ouattara in the presidential election of December 2010.
The charges relate to events between 16 December 2010 and 12 April 2011, the ICC said.
Prosecutors say about 3,000 people died in violence by both sides and there were other abuses including sexual violence.
The attacks Mr Gbagbo is accused of "were committed pursuant to an organisational policy and were also widespread and systematic as they were committed over an extended time period, over large geographic areas, and following a similar general pattern", the ICC said.
Mr Gbagbo is expected to make an initial appearance in court within a few days.
Before his transfer to The Hague, he had been under house arrest in Korhogo in the north of Ivory Coast since April, when he was ousted with the help of UN and French forces who carried out air strikes.
Continue reading the main story

ICC chief prosecutor Luis Moreno-Ocampo visited the country in mid-October as part of the inquiry.
He said his investigation would be impartial and that he would focus on up to six people who, he said, were most to blame for the violence.
A statement read on Ivorian national television, signed by state prosecutor Simplice Kouadio, said the ICC had issued an arrest warrant for Mr Gbagbo last week.
The warrant was issued secretly and he received it on Tuesday in the presence of his lawyers.
The transfer comes at a sensitive time - just two weeks ahead of legislative elections.
Human rights groups welcomed the arrest warrant but said that, while Mr Gbagbo's forces had triggered the violence, both sides had been implicated in grave crimes.
"Victims of abuse meted out by forces loyal to President Ouattara [also] deserve to see justice done," said Elise Keppler of Human Rights Watch.
'Victor's justice' 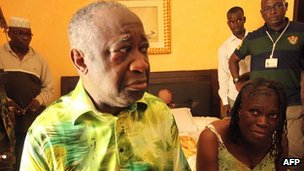 Laurent Gbagbo has been detained since his arrest in April after he refused to stand down as president
His arrest was a "welcome step", Ali Ouattara of human rights group Cote d'Ivoire Coalition for the ICC (CI-CPI) said in a statement, quoted by Reuters news agency.
"But it is critical that the court investigate all serious crimes committed by all parties since the outbreak of armed conflict in 2002."
In a statement to Reuters, an adviser to Mr Gbagbo, Toussaint Alain, called the former president's transfer "victor's justice... a political manoeuvre designed to liquidate President Gbagbo".
But Mr Moreno-Ocampo vowed in a statement that Mr Gbagbo would not be the last person to be brought to account, saying: "Ivorian victims will see justice for massive crimes: Mr Gbagbo is the first to be brought to account, there is more to come."
Although Ivory Coast is not one of the member countries covered by the ICC, it has accepted its jurisdiction.
Mr Gbagbo is also being investigated by Ivorian justice officials for "economic crimes". He has been charged with looting, armed robbery and embezzlement.
Laurent Gbagbo was the president of Ivory Coast for 10 years, during which time the country was virtually partitioned by civil war.
at November 30, 2011 No comments:

How hackers extorted $1.14m from University of California, San Francisco 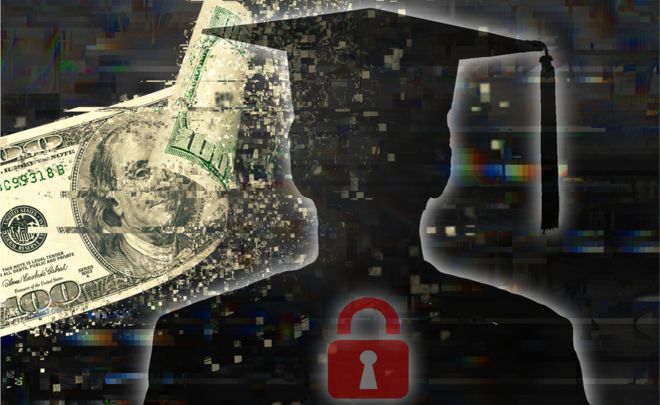