The rich: Exactly what does the terminology mean? 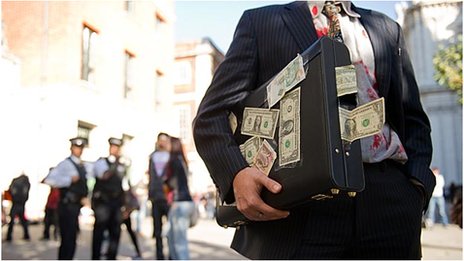 "Bankers", "the rich" and "the 1%" have become part of the lexicon of a maelstrom of protest. But what do the terms really mean?
A wave of protests across the world and of more measured anger expressed in newspaper letters pages and on social networking sites have thrown up a new lexicon of resentment of the wealthy and the powerful.
But how did all these newly popular terms come to be used as they are?

Everyone knows someone they consider to be rich. But many would struggle with a precise definition, and plenty considered rich by others would shy away from using the term.
In his book Richistan, Wall Street Journal reporter Robert Frank concluded that "people's definition of rich is subjective and is usually twice their current net worth". Some people would define rich as having more money than you "need" to live, but definition of "needs" vary dramatically.Continued
at November 24, 2011