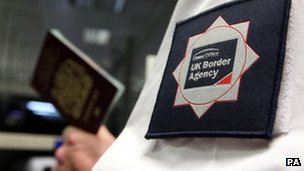 Civil servants from across Whitehall are being lined up to act as border staff at UK ports and airports during next week's public sector strikes.
Thousands of border agency workers are expected to strike on 30 November in protest at government pension changes.
Ministers fear there could be major disruption for travellers, so volunteers are being asked to step in.
The UK Border Agency has insisted the civil servants will be properly trained despite union concerns.
It is expected they would mainly check the passports of travellers arriving from the European Economic Area and man so-called "e-gates" where passengers use their biometric passports.
'Desperation' A UKBA spokesman said: "The security of the UK border remains our top priority and it is absolutely right we explore all options to ensure we minimise any disruption caused by planned union action."

It's an insult to hard-working border force staff”

Mark Serwotka PCS union
However, union chiefs expressed concern that the officials might not be properly trained and that borders could be put at risk.
Mark Serwotka, general secretary of the Public and Commercial Services Union, said: "This underlines not only the level of desperation at the top of UKBA but also the important work staff do day in, day out.
"It's an insult to hard-working border force staff that, in an effort to break a strike entirely of their own making, the government is scratching around trying to cover skilled work with volunteers with next to no training."
The government has confirmed earlier reports that UKBA is planning to fly some officials home from overseas positions to help deal with the strike.
In the wake of the recent row between Home Secretary Theresa May and former UK border force chief Brodie Clark over the relaxation of controls during the summer, it is extremely unlikely that officials would be prepared to bypass any rules to ease the pressure of queues.
Pension negotiations The BBC has also learned that the government has told union bosses that they are not prepared to offer any further concessions over pension reforms as a result of the planned strikes.
The government recently made what it describes as an improved offer to the unions, promising that public sector workers ten years away from retirement would not see any change to their pensions. It also promised improved accrual rates.
Ministers fear that any further concessions would send the wrong signal to financial markets by suggesting that the government was not serious about cutting the deficit and making substantial savings in the public sector pension bill.
Ministers argue that public sector pensions have become unaffordable because of rising life expectancy, but they insist that even after the planned changes, state employees will still be better off than the majority of workers in the private sector.
Unions say their members are being asked to work longer, contribute more and receive less.
at November 24, 2011