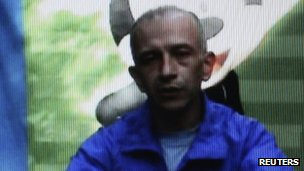 Left-wing Farc rebels in Colombia have shot dead four hostages, the authorities say.
The captives - all members of the security forces - were killed as troops approached the camp where they were held in the southern region of Caqueta.
All had been held for more than 12 years after being captured in rebel attacks.
Hours after their bodies were discovered, a fifth hostage was found alive.
Defence Minister Juan Carlos Pinzon said the four dead hostages had been killed execution-style - three shot in the head and one in the back.
"They were cruelly murdered with coups de grace," he said, adding that chains - presumably used to hold them captive - were found alongside their bodies.
'Atrocious crime' President Juan Manuel Santos said the Farc (Revolutionary Armed Forces of Colombia) were "solely responsible" for the deaths, which he called a "crime against humanity".
"It is an atrocious crime that deserves the condemnation of all Colombians and the international community," he said.
The victims have been named as police Col Edgar Duarte Valero, police Major Elkin Hernandez Rivas, policeman Alvaro Moreno, and army Sgt Jose Martinez Estrada. 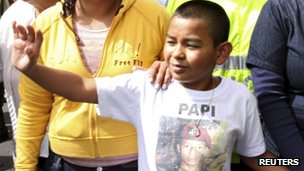 Sgt Martinez's son Johan campaigned hard for the release of a father he never met
Sgt Martinez had been a captive for nearly 14 years - the longest of any hostage held by Farc. He left behind a teenage son he had never met.
The hostage who survived - police Sgt Luis Alberto Erazo Maya - apparently escaped into the jungle in the confusion as troops exchange fire with the guerrillas, who fled the scene.
Bargaining chips The killing of the hostages is a setback for the Colombian security forces, after a series of victories against the Farc in recent years.
It comes just three weeks after Farc leader Alfonso Cano was killed in combat.
The Farc still hold 10 members of the security forces, as well as dozens of civilian captives.
In the past the Farc tried to use the hostages as bargaining chips to secure the release of captured rebel fighters.
In February they released six hostages in what they called a gesture of peace to the government of Mr Santos.
However the Farc have also killed hostages in the past rather than allow them to be rescued.
Families of some of the hostages have criticised attempts to rescue them, calling for negotiated releases instead.
Mr Santos has said there can be no peace talks with the rebels until they release all their captives and stop attacks.
The Farc have been fighting to overthrow the Colombian government since the 1960s.
at November 27, 2011