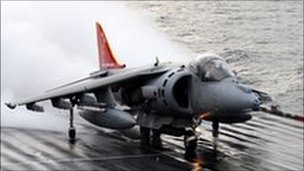 Britain is selling 72 retired Harrier jump jets to the US in a deal worth about $180m (£116m).
The Harriers, which were retired last year as part of defence cuts, will be used as a source of spare parts for the US Harrier fleet.
Defence Minister Peter Luff said the sale was a good deal for UK taxpayers and would allow Britain to invest in more modern and capable aircraft.
Harriers will be replaced by the Joint Strike Fighter by the decade's end.
Mr Luff told parliament: "We have agreed the sale of the final 72 Harrier aircraft frames and associated parts which will be used as a major source of spares for the US Marine Corps Harrier AV-8B fleet of aircraft."
The deal represented "a good deal both for UK taxpayers and the US government," he said.
Mr Luff said that adding the savings made from retiring the Harrier fleet, their sale saved the UK about £1bn.
The British government retired its Harrier fleet as part of the strategic defence and security review (SDSR).
Critics say the decision to get rid of the Harriers along with the Ark Royal aircraft carrier leaves the UK without a carrier able to operate strike aircraft until 2020. The Harriers made their final flight last December.
The Ministry of Defence said cuts predating the SDSR meant the Harrier force was too small to carry out operations in Afghanistan whilst maintaining a contingent capability for operations such as Libya.
Mr Luff said that Harriers had served the UK "with great distinction" but retiring them "eight years earlier than planned was the right decision".
He said: "Had we taken the decision in the SDSR to decommission Tornado instead we would not have been able to carry out the missions that were required simultaneously in Libya and Afghanistan.
"It was essential to retire older, less capable aircraft to allow us to invest in more modern, cutting-edge fast jets.
"As our operations over Libya proved, we have the capability to project decisive air power and can utilise our extensive basing and over-flight rights to great effect."
at November 24, 2011