Stalin's daughter Lana Peters dies in US of cancer 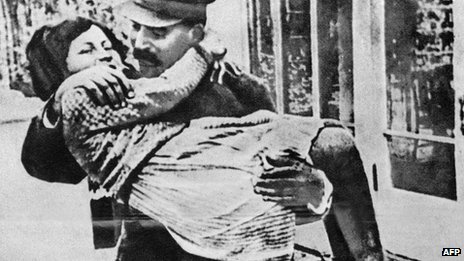 Svetlana was a Soviet celebrity as a child; her defection as an adult embarrassed the Communist party
Continue reading the main story

The only daughter of Soviet dictator Josef Stalin has died of colon cancer in a US care home, aged 85.
Svetlana Alliluyeva, also known as Lana Peters, passed away in the state of Wisconsin on 22 November, US officials have confirmed to BBC Russian.
Her defection from the Soviet Union in 1967 was a propaganda coup for the US. She wrote four books, including two best-selling memoirs.
But she said she could not escape the shadow of her father.
'Little sparrow' When Peters arrived in the US, she said she had come for the "self-expression that has been denied me for so long in Russia".

Her defection was partly motivated by the Soviet authorities' poor treatment of her late husband, Brijesh Singh, she said.
Peters went to India in 1966 to spread Singh's ashes, but instead of returning to the Soviet Union she walked into a US embassy to seek political asylum.
She burned her passport, denouncing communism and her father, whom she called "a moral and spiritual monster".
She graduated from Moscow University in 1949, initially working as a teacher and translator.
Peters was married four times - three of them in Russia - and left two children behind in her homeland.
Her first memoir, Twenty Letters to a Friend, was published in 1967 and made more than $2.5m.
She took the name Lana Peters upon marrying architect William Wesley Peters in the US.
The couple settled in central Wisconsin and had a daughter, Olga, before divorcing in 1973.
She returned to the Soviet Union briefly in the 1980s, renouncing the US, but left again after feuding with relatives.
In an interview in 1990 with the Independent newspaper, Peters said she had no money and was living with Olga in a rented house.
Stalin, who died in 1953, is deemed responsible for the deaths of millions of his countrymen.
Peters - who was six years old when her mother took her own life - was once close to her father, who called her his "little sparrow". But they grew distant in his final years.
He sent her first love, a Jewish filmmaker, to Siberia.
Peters's brother, Jacob, died in a Nazi concentration camp during the Second World War when her father refused to exchange him for a German general, while her other brother, Vasili, died an alcoholic, aged 40.
Peters bemoaned the constant association with her father.
"People say, 'Stalin's daughter, Stalin's daughter,' meaning I'm supposed to walk around with a rifle and shoot the Americans," she once said.
"Or they say, 'No, she came here. She is an American citizen.' That means I'm with a bomb against the others.
"No, I'm neither one. I'm somewhere in between. That 'somewhere in between' they can't understand."
While Peters denounced her father's regime, she also blamed other communist party leaders for the Soviet Union's policy of sending millions to labour camps.
at November 28, 2011