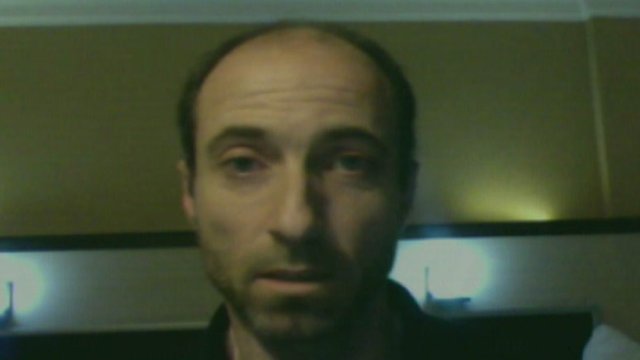 Speaking on Wednesday, Justin Mellersh said not being able to see the bodies of his children was "absolutely crushing"
Continue reading the main story

The father of two children from Hampshire found dead in Turkey fears they have already been buried.
Yaanis and Mira Mellersh, aged eight and six, were found dead with their Turkish-born mother on Friday.
Justin Mellersh, 46, had legal custody but his children had been missing since early 2010. He is in Turkey fighting to bring the bodies back to the UK.
He said he believes an internet report that they have already been buried and, if correct, wants the bodies exhumed.
The BBC has contacted the Turkish Embassy in London but officials are yet to comment on the case.
'Extreme thing' The children's UK-based family appealed to the Turkish president earlier who was in Hampshire during a state visit.
Mr Mellersh, whose parents live in the New Forest village of Minstead, near Lyndhurst, said he wanted to bury his children there. 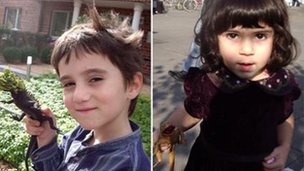 Yaanis and Mira Mellersh grew up in Hampshire's New Forest before moving to Germany
Speaking to BBC News from Turkey, he said: "According to a website apparently the children have been buried, they have had a funeral. It's not something I can confirm but I suspect it is true.
"I think it is only fair and morally right that these children should go to their father, to their next of kin.
"My children should be where I decide and certainly I should be able to see them before they are buried.
"There is a possibility they could be exhumed and it is a very extreme thing and hard for me to go through that.
"If I was asked if I was prepared to do that I think I would say yes."
'Political problem' He had earlier said a Turkish court had ruled the bodies should be transferred to the custody of their mother's relatives in Turkey.
The children grew up in Hampshire before the family moved to Germany. Their mother, Elke Mellersh, 45, was a German citizen.
Mrs Mellersh was wanted by Interpol on suspicion of child abduction after she and the children went missing near Bremen, in Germany, in February 2010. 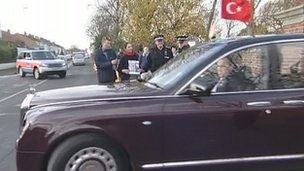 Natasha Mellersh tried to catch the attention of the Turkish president in Gosport, Hampshire
He had called on the UK Government to intervene in the case.
Meanwhile, the children's cousin, Natasha Mellersh, appealed to President Abdullah Gul by holding up a placard showing pictures of the children while he visited a naval cemetery in Gosport, Hampshire, on a three-day state visit.
She stood at the cemetery's gate but the president's cavalcade did not stop.
She said: "We're here as we wanted to raise the issue with the president, to make him aware of this escalating from a legal issue to a political problem."
The bodies of the children and their mother were found in a farmhouse in Soke near the Aegean coast, western Turkey, on Friday.
at November 24, 2011

What I miss is the other side of the story. What do you think makes a woman leave everything she has: her home, her friends, the childrens friends, her job, school etc. and become a searched person? Just being bored by her loving caring husband? No!
What british press doesn´t mention with a single word can be read in turkish newspapers. This man was accused of violence an sexual abuse. Therefore Mrs. Mellersh wanted to seperate from him, but in the terms of right he wanted to see the children too. How could she protect her children, who told horrible things?
As we all know police and courts can do nothing without hard evidence. The childrens report at german family court doesn´t count too much.
Why does the british press not mention the letters she left?
Why ist it always the first step by powerful people to tell, the woman was mentally ill?
For me the main tragedy is, that this woman and her children could not be helped by authorities and institutions, so she had no choice than do something illegal and flee. And be sure, she´s not the only one!

I remeber the family from their times in Germany. I never thought something strange about the mother but witnessed two scenes when the kids had to go with their father, that seemed very uncomfortable to me.
Now, that we know (through turkish press only) that she wanted to divorce because of violence and sexual abuse these scenes become quite telling to me.
I didn´t know that she had to flee, just knew that she went to another city.
It´s a really sad sad story to hear how despaired she got and I´m really angry to see her blamend being mentally ill.
Just showing one side because of patriotism is no good journalism!
R. Müller, Germany

These comments are offensive. Of course she was not normal. SHE KILLED HER OWN CHILDREN! And of course she claimed abuse! She was abducting the children against the law, what else could she say in defense of her illegal acts?
What barbaric person justifies such horrid things??