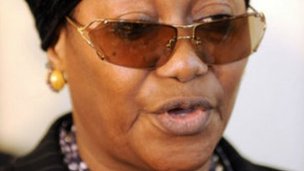 Nigeria's President, Goodluck Jonathan, has sacked the head of the country's anti-corruption agency, the Economic and Financial Crimes Commission (EFCC).
Farida Waziri's removal was to "revitalise the fight against corruption", his spokesman said.
Her predecessor at the EFCC, Nuhu Ribadu, was removed midway through his term in 2007.
Rights groups have been critical of the agency, accusing it of being under the influence of politicians.
Nigeria has been plagued by allegations that its wealth has been used for corrupt purposes since the oil boom of the 1970s.
Ms Waziri's deputy, Ibrahim Lamorde, has been appointed by the president to head the commission.
'Trial by headlines' "The removal of the EFCC chair is part of President Jonathan's determination to revitalise the fight against corruption," presidential spokesman Reuben Abati said.
"President Jonathan may in due course announce further reforms and will be looking at more key areas to give more vigorous emphasis to the administration's transformation agenda," he said.
EFCC spokesman Femi Babafemi told the AP news agency that Ms Waziri still had at least another year to serve.

I do not bother about the personalities around these institutions... it is more important to talk about how we strengthen them”

Ezenwa Nwagu Transparency In Nigeria
The BBC's Jonah Fisher in Lagos says the EFCC's record has been at best mixed.
It was set up in 2002, three years after the end of military rule in Nigeria.
In that time, it has prosecuted 30 politicians, of whom only four have been convicted and none are now in prison.
Some say it has chosen its targets selectively with politics in mind.
In August, US-based Human Rights Watch said the EFCC's failures were also the fault of Nigeria's political system which continued "to reward rather than punish corruption".
Our correspondent says critics of Ms Waziri believe the commission has lost energy and vigour during her time in office - and that instead of using the courts she has resorted to "trial by headlines".
He says some have even accused her of corruption - an allegation she has always denied.
In reaction to the sacking, Ezenwa Nwagu, vice-president of Transparency In Nigeria, said it was up to the president who to "hire and fire".
"I do not bother about the personalities around these institutions," he told the BBC Hausa Service.
"It is more important to talk about how we strengthen them so that whoever is appointed can have a strong organisation that is capable of dealing with the issues."
at November 23, 2011