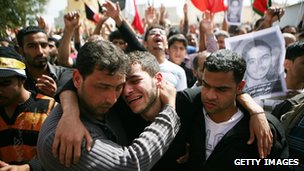 King Hamad of Bahrain has replaced the head of the country's security agency following an inquiry into the crackdown on protesters earlier this year.
Sheikh Khalifa bin Abdullah, a member of the ruling family, has been moved to another senior security role.
The inquiry, published last week, found that "excessive force" had been used against pro-democracy protesters.
More than 40 people died during Shia-led protests in February and March.
Abel bin Khalifa Hamad al-Fadhel has been named as the acting security chief, while Sheikh Khalifa bin Abdullah was appointed secretary general of the Supreme Defence Council, an official statement said.
Bahrain's Independent commission of Inquiry was set up after the country faced international criticism of its handling of the protests, which have continued sporadically.
The majority of the population of the Gulf state is Shia Muslim and the violence has fuelled anger against the ruling Sunni royal family and political elite.
More than 1,600 people have been arrested since the start of the protests. The commission found that many detainees had been subjected to "physical and psychological torture" and their basic human rights were violated.
at November 29, 2011