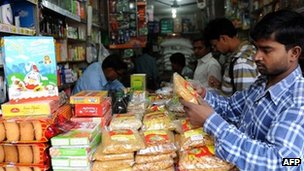 India has approved long-awaited proposals to open up the retail market to global supermarket chains.
Food Minister KV Thomas said the cabinet has agreed to 51% foreign ownership of multi-brand retail stores, allowing groups like Wal-Mart and Tesco to open stores.
Such operators currently can only sell wholesale in India and not directly to customers.
A decision on the issue has been pending for two years.
Mr Thomas told reporters that the cabinet decided to raise the cap on foreign investment in single-brand retailing - such as Apple or Reebok - to 100%, from its current 51%.
"Consumers will have many more choices," said Gibson Vedamani, of the Retailers Association of India. "It will truly be a borderless world in terms of products available."

Nidhi Dutt BBC News, Mumbai
Foreign Direct Investment (FDI) in retail has been a contentious issue in India for years.
International supermarket chains like Tesco, Wal-Mart and Metro have been pushing for restrictions to be lifted to allow them greater access to one of the world's fastest growing retail markets.
If FDI in retail does become a reality, it could revolutionise the country's retail sector.
Industry bodies have widely welcomed the cabinet's approval, saying that foreign firms could provide a healthy dose of competition, provide investment, and help to smooth out bottle necks that have traditionally plagued India's vast supply chains.
The Associated Chambers of Commerce and Industry in India expects the country's retail sector to be worth $1.3 trillion by 2018.
But this is a politically sensitive and divisive issue. Opposition parties and traditional local businesses are likely to try and block FDI in retail from being implemented.

Supporters of the move say it will increase competition and quality while reducing prices, which have been hit by close to double-digit inflation.
Opponents say the multi-nationals will squeeze out India's smaller and poorer traders and drive down prices paid to India's farmers.
'Completely opposed' One cabinet ally of the ruling Congress party, Dinesh Trivedi of the Trinamool Congress, said his party was "completely opposed to it".
He said: "My suggestion in the cabinet meeting will be that an all-party meeting should be called to discuss this sensitive matter before taking it up in the cabinet."
The main opposition Bharatiya Janata Party is opposed to the proposal and there have been street protests by traders.
BJP politician Murli Manohar Joshi said the move was "a tool to kill the domestic retail industry".
But Gibson Vedamani, a board member of the Retailers Association of India, told Agence France-Presse: "If this proposal gets through, consumers will have many more choices - it will truly be a borderless world in terms of products available."
Trade Minister Anand Sharma said before the decision that there was "a broad-based consensus" in the cabinet in favour of the proposal. 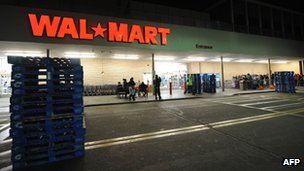 Giants like Wal-Mart have long eyed the lucrative Indian market
However, some analysts have pointed to the potential political fallout and say there may be another move to postpone any decision.
The multi-nationals have long been eyeing the lucrative Indian market.
Tesco, for example, welcomed the decision.
"Allowing foreign direct investment in retail would be good news for Indian consumers and businesses and we await further details on any conditions," the company said.
"We already have a franchise arrangement with Tata's Star Bazaar stores. Learning about India and serving more customers every month is a win-win for customers, suppliers, Tesco and Tata."
Any easing of regulations could eventually come with strict controls, for example on local sourcing and levels of investment.
at November 24, 2011

It was the homeland security that installed UID system in India, under the guise of fighting terrorism.

But We know that "Homeland security" only works for maximizing Walmart's Profitability.

Just when UID system in India was installed, Walmart comes in for the kill.

I started writing against Walmart, just 5 blogs against them and they hacked my blog. But that wont stop me from exposing these demons~