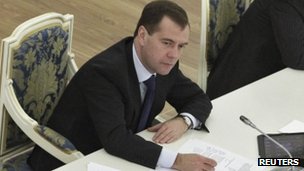 Russian President Dmitry Medvedev has warned that missiles could be deployed on the EU's borders if the US pursues its missile defence plans.
In a televised statement, he said "modern weapons systems" could be deployed in Kaliningrad if Russia, the US and Nato failed to come to a deal.
He added that Moscow may opt out of the New Start arms deal agreed with the US.
Nato chief Anders Fogh Rasmussen said he was "very disappointed" by Mr Medvedev's response.
Washington wants an anti-missile shield ready by 2020 but Moscow considers the idea a threat to its nuclear forces.
The US says the shield is intended to provide protection from the potential missile threat posed by countries like Iran.
Washington had originally intended to locate major parts of its missile defence shield in Poland and the Czech Republic under Bush-era plans.
But Russia had objected vigorously, and when President Obama took office he scaled-back these ambitions.

Jonathan Marcus BBC Diplomatic Correspondent
There is a danger that Moscow looks set to make the issue of ballistic missile defence a touch-stone for its broader relationship with Washington.
Russia's consistent position has been that if the US goes ahead with the European-based elements of the system then Russia will respond. Back in May President Dmitry Medvedev warned of a new "Cold War".
Now he is making it clear that Russia would respond by stepping-up the modernisation of its strategic or long-range nuclear missiles while also deploying shorter-range Iskander missiles in the enclave of Kaliningrad to threaten those countries hosting elements of the system.
These threats have been made before. Russia is heading into an electoral season. The tough rhetoric is a reminder that this issue is a long way from being resolved.
There are already tensions between Russia and the US over Libya; western pressure on Syria and so on. On missile defence Moscow now seems to be digging in its heels.

However, Moscow has yet to be satisfied that the revised plans do not pose a threat to its interests.
Writing on Twitter, Mr Rasmussen said: "The suggestion that deployment of missiles in the areas neighbouring the alliance is an appropriate response ... is very disappointing.
"Nato's missile defence system [is] designed to defend against threats from outside Europe. Not designed to alter balance of deterrence."
'Symbolic' move President Medvedev's warning follows an announcement by the United States on Tuesday that it would stop sharing information with Russia on non-nuclear military forces in Europe.
The information was being provided to Moscow under the CFE (Conventional forces in Europe) treaty.
Russia suspended its observance of the treaty in 2007, but Washington had continued to provide the data while negotiations on missile defence continued.
Analysts say the US move is largely symbolic, although the US state department said it was aimed at bringing Russia back to the table at negotiations.
Presidents Obama and Medvedev signed the New Start nuclear arms treaty - to reduce their nuclear arsenals - in April 2010 and it was ratified by the US Senate last December.
The agreement was described by Mr Obama as the most significant in nearly two decades, so if Russia followed through on its threat to opt out it would be a big blow to relations.
at November 23, 2011