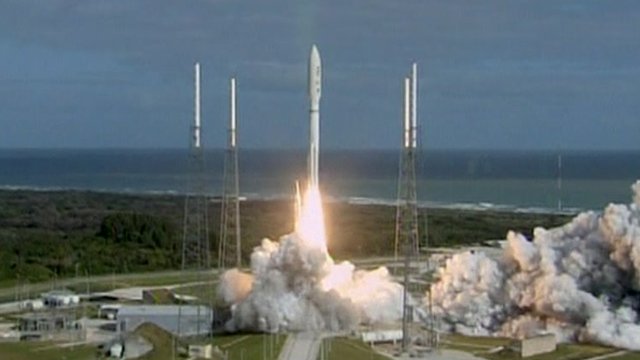 Nasa has launched the most capable machine ever built to land on Mars.
The near one-tonne rover, tucked inside a capsule, left Florida on an Atlas 5 rocket at 10:02 local time (15:02 GMT).
Nicknamed Curiosity, the rover will take eight and a half months to cross the vast distance to its destination.
If it can land safely next August, the robot will then scour Martian soils and rocks for any signs that current or past environments on the planet could have supported microbial life.
The Atlas flight lasted almost three-quarters of an hour. 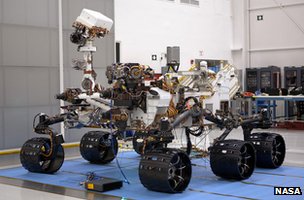 By the time the encapsulated rover was ejected on a path to the Red Planet, it was moving at 10km/s (6 miles per second).
Spectacular video taken from the upper-stage of the rocket showed it drifting off into the distance.
"Our spacecraft is in excellent health and it's on its way to Mars," said Curiosity project manager Peter Theisinger.
Nasa received a first communication from the cruising spacecraft about 50 minutes after lift-off through a tracking station in Canberra, Australia.
Controllers will command a course correction manoeuvre in two weeks to refine the trajectory to the Red Planet.
The rover - also known as the Mars Science laboratory (MSL) - is due to arrive at the Red Planet on 6 August 2012 (GMT). Then, the hard part begins - landing safely.
One senior space agency official this week called Mars the "Death Planet" because so many missions have failed to get down in one piece.
The Americans, though, have a good recent record and they believe a new rocket-powered descent system will be able to place the rover very precisely in one of the most exciting locations on the planet.

It is being aimed at a deep equatorial depression called Gale Crater, which contains a central mountain that rises some 5km (3 miles) above the plain below.
The crater was chosen as the landing site because satellite imagery has suggested that surface conditions at some point in time may have been benign enough to sustain micro-organisms.
This included pictures of sediments at the base of the peak that were clearly laid down in the presence of abundant water.
MSL is equipped with 10 sophisticated instruments to study the rocks, soils and atmosphere in Gale Crater.
The $2.5bn (£1.6bn) mission is funded for an initial two Earth years of operations, but MSL-Curiosity has a plutonium battery and so should have ample power to keep rolling for more than a decade.
It is likely the mechanisms on the rover will wear out long before its energy supply.
"The agency is ecstatic," observed Doug McCuistion, Nasa's Mars exploration programme director.
"We have started a new era of exploration, not just technologically but scientifically as well.
"I hope we have more work than the scientists can handle. When we get to the surface, I expect them all to be overrun with data they've never seen before. I expect the public to have images, vistas that they've never seen before either.
"Down in the bottom of Gale Crater, those images are going to be just stunning. It will be like sitting at the bottom of the Grand Canyon, I believe." 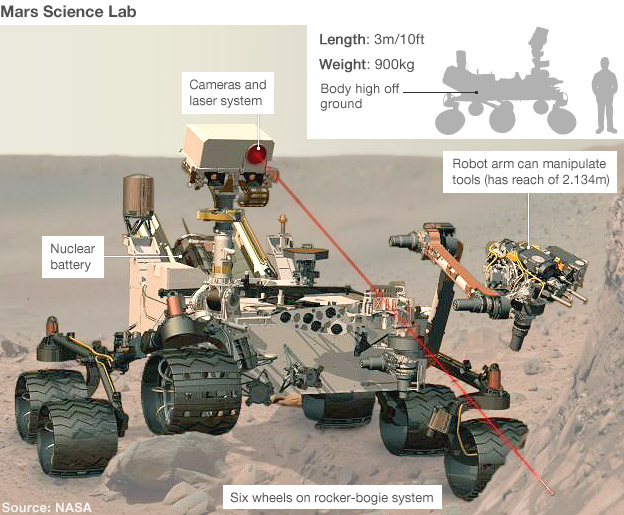