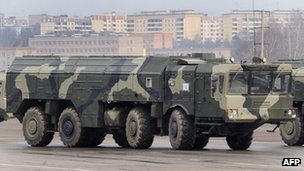 Russia has turned on a new incoming missile early warning system in its westernmost region in response to US plans for a missile shield in Europe.
President Dmitry Medvedev ordered the system to be activated on a visit to the radar unit in Kaliningrad, a Baltic region bordering EU countries.
The unit is equipped with the new Voronezh-DM radar system.
Mr Medvedev has warned Russian missiles could be deployed on the EU's borders if the shield is installed.
Washington wants an anti-missile shield ready by 2020, arguing that it is necessary to provide protection from the potential missile threat posed by countries like Iran.
Under President George W Bush, the US had initially intended to locate major parts of the shield in Poland and the Czech Republic, but Russia objected vigorously.
When Barack Obama took office in the White House, he scaled back the original ambitions.
"Nato's missile defence system [is] designed to defend against threats from outside Europe - not designed to alter balance of deterrence," Nato chief Anders Fogh Rasmussen said in a recent tweet.
'Our signal' In a statement carried by Russian news agencies, Mr Medvedev said: "I expect that this step will be seen by our partners as the first signal of the readiness of our country to make an adequate response to the threats which the missile shield poses for our strategic nuclear forces."
Quoted by Interfax, he said: "If our signal is ignored... we will deploy other means of defence including the adoption of tough counter-measures and the deployment of a strike group."
Mr Medvedev has spoken of deploying Iskander missiles - modern versions of the mobile Scud surface-to-surface missile - in Kaliningrad.
On Tuesday, he said Russia was ready to listen to new anti-missile defence proposals from "Western partners" but assurances were not enough.
"Verbal statements, unfortunately, do not guarantee the defence of our interests," the Russian president said.
"If other steps are taken then, naturally, we are ready to listen to them but, in any case, verbal statements are not enough."
'Europe and the Atlantic' The radar system activated on Mr Medvedev's orders was installed this year at Pionerskoye, Kaliningrad, and is meant to replace older systems in Ukraine and Belarus, according to Russian news website lenta.ru.
With an operating range of 6,000km (3,730 miles), the Voronezh DM can cover "all of Europe and the Atlantic", according to the Russian military.
It is designed to detect space and aerodynamic targets, including ballistic and cruise missiles.
Iran's nuclear programme and its development of long-range missiles have alarmed Western states, despite Tehran's assurances it is not seeking weapons of mass destruction.
Proposed Nato missile shield