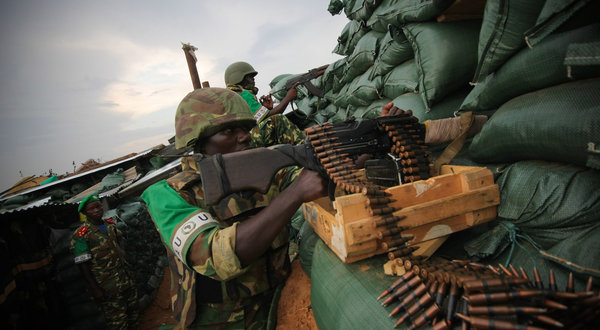 NAIROBI, Kenya — When the first batch of African Union peacekeepers landed at Mogadishu’s decrepit airport in 2007, they were immediately shelled by insurgents with mortars and given little chance of success. This was Somalia after all, the graveyard of several other doomed interventions, and the African Union soldiers were a last resort for a deeply troubled mission.

Last month near Mogadishu, Shabab militants displayed the bodies of men they said were peacekeepers.

Readers shared their thoughts on this article.

But four years later and nearly 10,000 soldiers strong, the African Union force in Somalia has hardened into a war-fighting machine — and it seems to be winning the war. Analysts say the African Union has done a better job of pacifying Mogadishu, Somalia’s capital and a hornet’s nest of Islamist militants, clan warlords, factional armies and countless glassy-eyed freelance gunmen, than any other outside force, including 25,000 American troops in the 1990s.
The peacekeepers have “performed better than anyone would have dreamed,” said J. Peter Pham, director of the Africa program at the Atlantic Council, a Washington research institution.
Their surprising success has put the African Union in the driver’s seat of an intensifying international effort to wipe out Somalia’s Shabab militants, once and for all. Kenya, Ethiopia, the United States, France, Djibouti, Burundi and Uganda have all jumped in to some degree against the Shabab, a brutal and wily insurgent group that is considered both a regional menace and an international threat, with possible sleeper cells embedded in Somali communities in the United States and Europe.
The Shabab have been terrorizing Somalia for years, imposing a harsh and alien form of Islam, chopping off heads and unleashing suicide bombers, including Somali-Americans recruited from Minnesota. But the African Union has dealt the Shabab a crippling blow in Mogadishu, which is what may have encouraged Kenyan and Ethiopian forces to recently invade separate parts of Somalia in an unusual regional effort to spread the Shabab thin on several fronts and methodically eliminate them.
But the Shabab are hardly giving up. Young, messianic insurgents are viciously resisting the African Union troops, sometimes fighting hand to hand, with both sides suffering heavy losses.
African Union officials, who have been reluctant to disclose casualties and in the past even provided apparently false accounting of the numbers, revealed that more than 500 soldiers had been killed in Somalia, making this peacekeeping mission one of the bloodiest of recent times.
Oct. 20 was a particularly bad day. Shortly after dawn, several hundred peacekeepers marched into Deynile, one of the last Shabab strongholds in Mogadishu.
“It started off easy, too easy,” groaned Cpl. Arcade Arakaza, a Burundian peacekeeper, from a hospital bed in Nairobi.
There was little resistance, with a few Shabab fighters fleeing in front of them. Civilians smiled from the bullet-riddled doorways, saying things like, “Don’t worry, Shabab finished.”
But suddenly the entire neighborhood opened up on the peacekeepers with assault rifles, belt-fed machine guns and rocket-propelled grenades, “women, kids, everyone,” Corporal Arakaza said. It was a classic envelope trap, with the Shabab drawing the peacekeepers deeper into their lair, sealing off the escape routes and then closing in from all sides.
Dozens of peacekeepers were wounded, including Corporal Arakaza, who was shot through the groin, and more than 70 killed in the span of a few minutes. But the African Union soldiers clawed back, eventually capturing a chunk of Shabab territory.
Unlike the Americans, who hastily left Somalia after 18 soldiers were killed during the infamous Black Hawk Down debacle in 1993, or the United Nations mission that folded not long afterward, the African Union has pressed on. It plans to send thousands more young men from deeply impoverished sub-Saharan nations into the maw of Somalia, an arrangement that is lucrative for the governments of the contributing countries and the soldiers themselves — they each can make $1,000 a month as a peacekeeper compared with as little as $50 back home.
The American government is helping foot this bill, contributing more than $400 million. Even so, some American officials say the mission is underfinanced. They insist the African troops need better flak jackets, more armored trucks and helicopters. Many peacekeepers bled to death that day in Deynile because they had no way of being rescued. Continued
at November 26, 2011