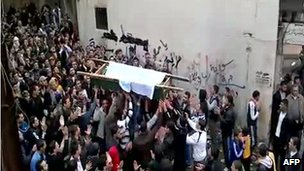 The Arab League has warned Syria it has one day to sign a deal allowing the deployment of observers or it will face economic sanctions.
The decision was taken at a league meeting in Egypt's capital, Cairo.
Damascus is objecting to the league's plan to bring 500 observers to Syria to monitor the situation on the ground amid continuing crackdown on protests.
More than 3,500 people have died since the protests began in March, the United Nations estimates.
The government of President Bashar al-Assad blames the violence on armed gangs and militants.
At least 40 people, including six children, have been killed across Syria in the past three days, activists say.
These reports are difficult to verify as foreign journalists are unable to move around Syria freely.
'Unified position' "Tomorrow [Friday] is the deadline for Syria to sign," said Afifi Abdel Wahab, Egypt's envoy to the Arab League.

Bashar is finished. The system is rotten to the core. It looks strong, perhaps, on the outside but it is weak at the heart”

Riyad al-Asad Syrian opposition leader
"If they don't sign, the economic and social council [of Arab League ministers] will meet on Saturday to discuss economic sanctions," he added.
Mr Abdel Wahab said sanctions could include a suspension of commercial flights to Syria and also a halt to dealings with the country's central bank.
The Syrian government is yet to respond publicly to the deadline.
Earlier this month, the Arab League voted to suspend Syria and warned of unspecified sanctions for not implementing a peace plan.
One of the main sticking points was Damascus' demand to amend the proposal for 500 observers to be allowed in to Syria.
Damascus reportedly wanted to reduce the number to 40 - a request rejected by the 22-member league.
In addition, a deadline for Syria to end its crackdown passed last Saturday night with no sign of the violence abating.
"Syria has not offered anything to move the situation forward," a senior league diplomat was quoted as saying by Reuters news agency earlier on Thursday.
"The position of the Arab states is almost unified," he said, adding that all agreed there should be no civil war or foreign intervention.
The venue of Thursday's meeting in Cairo had to be moved away from the Arab League headquarters because of the continuing protests against Egypt's ruling military council in Tahrir Square.
'Humanitarian zones' Meanwhile, the head of opposition Free Syrian Army (FSA) group told the BBC that President Assad was now "finished".
Speaking from a refugee camp in Turkey, Riyad al-Asad said: "Even if the outside world doesn't help us or stand with us, the Syrian nation is determined to bring down this dictator."
"The system is rotten to the core. It looks strong, perhaps, on the outside but it is weak at the heart," the former colonel in the air force added.
The FSA was formed in August 2011 by army deserters.
Meanwhile, France has suggested that some sort of humanitarian protection zones be created inside Syria, the BBC's Jon Leyne in Cairo reports.
It is the first hint that international military intervention is under consideration, our correspondent adds.
at November 24, 2011