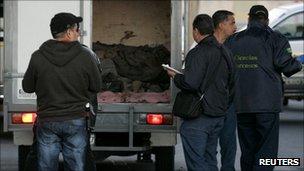 At least 20 bodies have been found in three abandoned vehicles in the western Mexican city of Guadalajara.
The find comes a day after 17 charred bodies were found in Culiacan in Sinaloa state, in killings described as "a message between rival drug gangs".
Guadalajara, which recently hosted the Pan American Games, has been relatively unscathed by the violence that has affected other Mexican cities.
More than 40,000 Mexicans have died in drug-related violence since 2006.
Message The vehicles were found beside a landmark at a busy junction in Guadalajara, which is Mexico's second city.
All the dead were men and some were gagged with their hands tied, officials said.
A written message purported to come from a drug cartel was left in one of the vehicles, but police have not revealed its contents.
Correspondents say the discovery has increased fears that Mexico's drugs war may be spreading to Guadalajara, which has so far suffered little of the bloodshed affecting other parts of the country.
Other major cities previously considered safe - such as Monterrey and Veracruz - have suffered a dramatic increase in violence and insecurity in recent years.
President Felipe Calderon deployed the army and federal police against Mexico's drug cartels after taking office in December 2006.
The government says record amounts of drugs have been seized, and cartel leaders captured or killed.
But the crackdown has led to an explosion of bloodshed, as the gangs fight both the security forces and each other.
at November 24, 2011