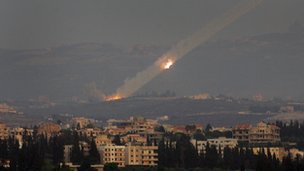 Several rockets fired from southern Lebanon landed in northern Israel, the Israeli army has said.
There were no casualties from the strikes, the first across the border since 2009. Two buildings were damaged.
The rockets fell in the Western Galilee region and the Israeli army returned fire into Lebanon.
In 2006, a war was fought between Israel and Hezbollah guerrillas based in Lebanon.
"The Israeli army considers that it is a serious incident and believes that it is the responsibility of the Lebanese government and the Lebanese army to avoid these kind of attacks," the Israeli army statement added.
Minor damage Four rockets landed in Israel, according to a report on Israeli public radio.
The Jerusalem Post website said one rocket landed in Biranit, 700 metres from the Lebanese border. No damage was reported.
Two rockets landed in the Western Galilee town of Netua, causing minor damage, and police were searching for the fourth rocket in a wooded area just south of Ma'alot, also in Western Galilee.
Local military commanders were assessing the situation but people in northern Israel, where the rockets landed, had not been told to go to air raid shelters, said an army spokesman.
The 34-day war between Israel and Hezbollah in 2006 left 1,200 Lebanese and 160 Israelis dead. Lebanon and Israel remain officially in a state of war.
Israel and the US have accused Syria of helping Hezbollah rearm. Earlier this year, Damascus denied it was supplying Scud missiles to the group.
at November 28, 2011