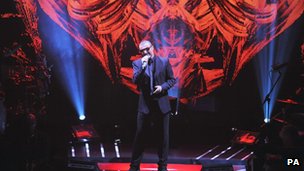 George Michael performed at the Royal Albert Hall in London as part of his Symphonica tour last month.
Continue reading the main story

George Michael has postponed a series of concerts after being taken to hospital for treatment for pneumonia.
The singer had been due to appear in Vienna as part of his Symphonica tour on Monday but cancelled two hours before it was due to start.
His publicist Connie Filippello said in a statement that the 48-year-old was currently receiving treatment.
She said upcoming performances in Vienna, Strasbourg and Cardiff had been postponed and would be rescheduled.
Austria's state broadcaster is reporting that the former Wham star is being treated in Vienna's AKH hospital.
He was to have played in Cardiff on Saturday and Sunday. His spokeswoman said rescheduled dates "will be provided when available".
The European tour of Symphonica kicked off in Prague in August and was originally meant to include 47 dates. It has seen the Careless Whisper singer return to live performance accompanied by a 41-piece symphony orchestra.
He had previously claimed his 2008 concerts would be his last live shows but announced the Symphonica tour after serving a short jail term last year for crashing his car in London while under the influence of cannabis.
At the press launch in May he said: "I felt very re-energised after my recent troubles.
"I think musically this tour and album will be surprising because I'm being far more true to myself."
In October, a viral infection caused Michael to pull out of a show at the Royal Albert Hall in London, following advice from doctors.
at November 23, 2011