Tensions Flare Between U.S. and Pakistan After Strike 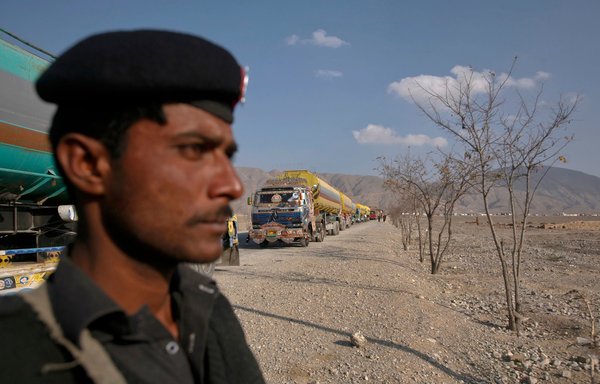 By SALMAN MASOOD and ERIC SCHMITT

ISLAMABAD, Pakistan — Pakistani officials said on Saturday that NATO aircraft had killed at least 25 soldiers in strikes against two military posts at the northwestern border with Afghanistan, and the country’s supreme army commander called them unprovoked acts of aggression in a new flash point between the United States and Pakistan.

Trucks carrying logistic supplies for NATO's forces in Afghanistan wait for clearance to cross the border from Pakistan.

The Pakistani government responded by ordering the Central Intelligence Agency to vacate the drone operations it runs from Shamsi Air Base, in western Pakistan, within 15 days. It also closed the two main NATO supply routes into Afghanistan, including the one at Torkham. NATO forces receive roughly 40 percent of their supplies through that crossing, which runs through the Khyber Pass, and Pakistan gave no estimate for how long the routes might be shut down.
In Washington, American officials were scrambling to assess what had happened amid preliminary reports that allied forces in Afghanistan engaged in a firefight along the border with insurgents and called in airstrikes. Senior Obama administration officials were also weighing the implications on a relationship that took a sharp turn for the worse after a Navy Seal commando raid killed Osama bin Laden near Islamabad in May, and that has deteriorated since then.
“Senior U.S. civilian and military officials have been in touch with their Pakistani counterparts from Islamabad, Kabul and Washington to express our condolences, our desire to work together to determine what took place and our commitment to the U.S.-Pakistan partnership, which advances our shared interests, including fighting terrorism in the region,” said Caitlin Hayden, a spokeswoman for the National Security Council.
Gen. John R. Allen, the commander of the NATO-led forces in Afghanistan, offered condolences and promised an investigation. “This incident has my highest personal attention and my commitment to thoroughly investigate it to determine the facts,” he said in a statement.
The strikes, which Pakistani officials said involved both helicopters and fighter jets, took place overnight at two military posts in Salala, a village in Pakistan’s Mohmand tribal region near the border with Kunar Province in Afghanistan. At least 40 soldiers were deployed at the posts, Pakistani military officials said, adding that NATO aircraft had penetrated roughly a mile and a half into Pakistan to make the strikes.
What remained unclear on Saturday, and what will be a main focus of NATO’s inquiry, was what exactly prompted the airstrikes and whether they were unprovoked or resulted from a communications mishap. A NATO spokesman, Brig. Gen. Carsten Jacobson, offered details suggesting that allied and Afghan troops operating near the border came under fire from unknown enemies and summoned coalition warplanes for help.
“In the early night hours of this morning, a force consisting of Afghan forces and coalition forces, in the eastern border area where the Durand Line is not always 100 percent clear, got involved in a firefight,” General Jacobson said, according to a transcript of his statements on NATO TV that the alliance provided American officials on Saturday. (The Durand Line is the colonial-era boundary between Pakistan and Afghanistan.)
“Air force was called in into this activity,” he said, “and we have to look into this situation of what actually happened on the ground.”
But several American and allied military, diplomatic and intelligence officials contacted on Saturday said it was unclear what threat, real or perceived, led to the airstrikes or why the allied aircraft fired on the Pakistani troops. “It’s real murky right now,” one senior American official said. “Clearly, something went very wrong.”
Such cross-border attacks have been at the heart of an increasingly hostile relationship between Pakistani and American officials. The United States has demanded that Pakistan do more to stop militants based in its territory, particularly from the feared Haqqani network and Al Qaeda, from crossing into Afghanistan to attack American forces. And United States forces in eastern Afghanistan say they have taken more mortar and rocket fire from positions at or near active Pakistani military posts in recent months, despite complaints to Pakistan about it.
Pakistani officials were enraged and embarrassed by the raid on Bin Laden’s compound and by repeated American drone strikes against militants in the northwestern tribal regions, which they consider breaches of the country’s sovereignty. CONTINUED
at November 26, 2011