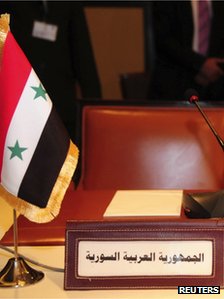 The Arab League has approved sanctions against Syria, including an asset freeze and an embargo on investments.
It comes after months of unrest. The United Nations estimates about 3,500 people have died as Syria has sought to put down anti-government protests.
The Arab League suspended Syria earlier this month, in a move denounced by Damascus as meddling in its affairs.
League foreign ministers adopted the unprecedented sanctions at a meeting in Cairo by a vote of 19 to three.
The move came after Syria refused to allow 4,000 Arab League monitors into the country to assess the situation on the ground.
Syria, one of the founder members of the Arab League, condemned the sanctions as a betrayal of Arab solidarity.
Syrian Foreign Minister Walid al-Muallem accused the league of seeking to "internationalise" the conflict.
Refusal to implement Qatari Prime Minister and Foreign Minister Sheikh Hamad bin Jassim al-Thani gave details of the sanctions to a news conference in Cairo. They include:
The declaration also calls on Arab central banks to monitor transfers to Syria, with the exception of remittances from Syrians abroad.
The league also voted to impose a ban on commercial flights between Syria and member states. A date for the ban to enter into force will be agreed within the next week.

Two of Syria's immediate neighbours, Iraq and Lebanon, abstained from the vote. Iraq suggested an economic blockade would not work in practice.
Sheikh Hamad said Iraq would refuse to implement the sanctions, while Lebanon had "disassociated itself."
Iraq is Syria's second-biggest trading partner, accounting for 13.3% of Syria's trade, to a value of 6.78bn euros (£5.81bn; $8.97bn).
Turkey - which attended the meeting as an observer, since it is not an Arab state - said it would act in accordance with the Arab League sanctions.
"When civilians are killed in Syria and the Syrian regime increases its cruelty to innocent people, it should not be expected for Turkey and the Arab League to be silent," said Turkish Foreign Minister Ahmet Davutoglu, according to the state Anatolia news agency.
The EU and the US already have sanctions in place against Syria.
The Arab League move is being portrayed in Damascus as part of a Western-inspired conspiracy to undermine the country because of its traditional resistance to Israel, says the BBC's Jim Muir in neighbouring Lebanon.
Syrian state television described the sanctions as "unprecedented measures aimed at the Syrian people".
Meanwhile, violence continued on Sunday with Syrian activists saying at least 11 people were killed across the country.
The flashpoint region of Homs saw at least six people killed in three separate incidents, the British-based Syrian Observatory for Human Rights said.
On Saturday, Syria buried 22 members of the armed forces, including six elite pilots ambushed on a highway near Homs, following a recent upsurge of armed attacks on security forces.
'Humanitarian corridor' The League threatened Syria with sanctions earlier this month after President Bashar al-Assad repeatedly failed to implement steps to end the violence, including allowing international observers to enter Syria.
Damascus depends on its Arab neighbours for half of its exports and a quarter of its imports, so the sanctions - supplemented by Syria's northern neighbour Turkey - will step up the pressure and increase Syria's sense of isolation.
On Saturday, Mr Muallem hit out at the group after it asked the UN to contribute to the proposed observer mission, calling it an invitation "for foreign intervention instead of a call to avoid one".
But Sheikh Hamad said the sanctions were necessary if the international community were to see that the Arab countries were "serious", the Reuters news agency reports.
"All the work that we are doing is to avoid this interference," he said, according to Reuters.