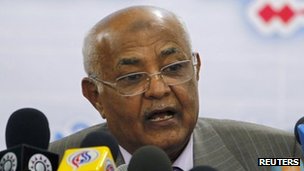 Yemen's Vice-President Abdrabbuh Mansour Hadi has named a senior opposition figure, Mohammed Basindwa, as interim prime minister.
He has been charged with forming a national reconciliation government ahead of early elections in February.
President Ali Abdullah Saleh transferred his powers to Mr Hadi under a deal brokered by regional states to end months of deadly unrest.
He has offered an amnesty to those who "committed errors during the crisis".
The amnesty did not extend to those involved in an assassination attempt against him in June in which he was badly wounded, Yemeni state TV reported.
Opposition spokeswoman Hurriya Mashhud rejected the amnesty declaration, saying it went against the agreement brokered by the Gulf Co-operation Council (GCC) that Mr Saleh signed last week.
"He no longer has the right, nor the prerogative or the capacity to take such decisions," she told AFP news agency.
Violent crackdown Mr Basindwa was put forward by opposition parties on Friday as their choice to be interim prime minister.
He is a former member of Mr Saleh's governing General People's Congress and held several cabinet positions, including foreign and information minister.
He left about 10 years ago to become an independent opposition figure.
Mr Basindwa now has two weeks to form a government consisting equally of opposition members and Saleh loyalists - according to the provisions of the GCC settlement.
On Saturday Vice-President Abdrabbuh Mansour Hadi announced elections would be brought forward to 21 February. 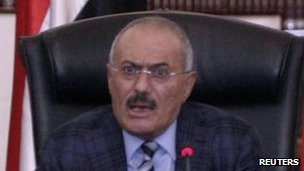 After months of delay, Mr Saleh signed an agreement to transfer power to the vice-president
Hundreds of people have died this year in protests against Mr Saleh's rule.
After months of delay, Mr Saleh signed the accord in Riyadh, Saudi Arabia, on Wednesday, transferring power to Vice-President Hadi in return for immunity from prosecution.
Early elections to be held within 90 days instead of in 2013 as previously scheduled, were also part of the deal.
Mr Saleh has ruled Yemen for 33 years.
His security forces cracked down violently on protests against his rule which began in January.
In an address to his governing party on Sunday, Mr Saleh urged attacks and anti-government protests to stop.
"Attacks on military bases, roads and transmission towers should stop. Protests should also stop in order to restore peace," he said.
But the immunity provision of the accord has angered anti-Saleh protesters, who have continued to demonstrate, demanding that he face trial for corruption and the deaths of protesters.
In addition, Yemen faces Shia rebels in the north, separatists in the south and an active branch of the international al-Qaeda network - al-Qaeda in the Arabian Peninsula.
at November 27, 2011