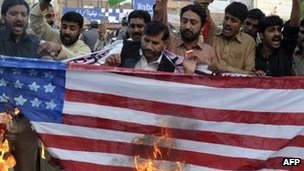 Pakistan is to boycott talks on Afghanistan's future in protest at a Nato air strike which killed 24 of its soldiers at the weekend, officials say.
The decision not to attend next week's conference in the German city of Bonn came after a cabinet meeting chaired by Prime Minister Yousuf Raza Gilani.
Pakistan says the air strike violated its sovereignty and the mandate of international forces in Afghanistan.
Nato and the US government have apologised, calling the deaths tragic.
Nato is investigating what happened. Pakistan has responded by cutting crucial Nato supply lines through its territory to Afghanistan.
Tuesday's cabinet meeting came amid mounting public anger in Pakistan and growing demands from opposition parties to sever all ties with the US.
"Pakistan has decided not to attend the Bonn conference as a protest," a government official told Reuters after the cabinet talks in Lahore.
Pakistan's military has denied reports that gunfire from its side of the border provoked the Nato strike on one of its checkposts.
Afghan officials have claimed that Nato forces were retaliating for gunfire from the Pakistani side of the volatile border on Saturday.
The incident has heaped further strain on already troubled relations between Nato and Pakistan, a crucial ally in the fight against the Taliban.
In recent months, the US military has accused Pakistan's spy agency of supporting militants fighting Nato troops in Afghanistan. Pakistan's military was incensed by the US raid which killed Osama Bin Laden on Pakistani soil in May.
'Under fire' The night-time attack took place at the Salala checkpoint in the Mohmand district, about 1.5 miles (2.5 km) from the Afghan border, early on Saturday morning.

The Pakistani army said helicopters and fighter aircraft hit two border posts, killing 24 people and leaving 13 injured. Local officials said the two posts were about 300m apart on a mountain top.
Unnamed Afghan officials quoted in The Wall Street Journal said Saturday's air strike was called in to shield Nato and Afghan forces who had come under fire.
One official quoted in the paper said that Kabul believed the shooting came from an army base.
"This is not true. They are making up excuses. What are their losses, casualties?" Pakistani army spokesman Maj-Gen Athar Abbas said in response to the allegations.

Military sources earlier told the BBC that a US-Afghan special forces mission had been in the area, where a Taliban training camp was believed to be operating.
They said the mission came under fire from a position within Pakistan, and they received permission from the headquarters of Nato's Isaf mission to fire back.
On Monday an Afghan defence official told the BBC that Nato was targeting high level Afghan and Pakistani Taliban commanders, including a foreign militant training suicide attackers in the Khas Kunar area close to the Pakistani border.
Officials say that these training camps were not far from Pakistani checkpoints.
But Maj-Gen Abbas said that the raid went on for more than an hour and continued even after local commanders contacted Nato telling them to stop the strike, according to the Associated Press news agency.
Pakistani officials have consistently maintained that there had been no militant activity in the area, and most of the Pakistani soldiers were asleep. They also said Nato had the grid references of the posts and therefore should not have fired.
Pakistani troops are fighting the Taliban in the border region. Hundreds of militants have been resisting attempts to clear them from southern and south-eastern parts of the district.
The US and Pakistan desperately need each other in order to shape the future of a stable and neutral Afghanistan before Western combat troops withdraw next year, correspondents say.
While Pakistani officials facing mounting domestic anger over ties with the US, they have little room for mavoeuvre - the country's military is heavily dependent on US aid.
at November 29, 2011