On November 29, 2011 · In Sports
Ethiopian male runners on Monday made a clean sweep of medals and top cash prizes at the 7th edition of the Obudu International Mountain Race.
For the third year running, Ethiopia has won the gold, but this time it was through 22 year old Mesfin Hunegnaewai who brushed aside the challenge of 50 other male runners and crossed the finishing line in a record time of 41.50. 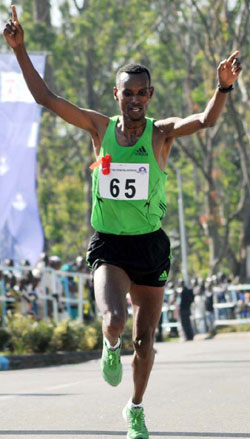 ALL HAIL THE KING ••• Ethiopian Mesfin Hunegnaewa finishes tops as he breasts the tape in a time of 41m.50secs. to win 7th Obudu Mountain Race yesterday in Obudu, Cross River State.
His compatriots Atsedy Tsegay and Azmeraw Beke came second and third to win silver and bronze with the time of 42.12 minutes and 42.30 minutes respectively.
In the female category the Ethiopians also dominated winning the gold and silver while Kenya won the bronze.
For this category, it was 18 years old Yalew Genet of Ethiopia who came first after outrunning 34 others to win the gold with the time of 48.45 minutes while Ayelewu Wuda Yimer also of Ethiopia placed second to win the silver by returning a time of 49.10 minutes to beat Margaret Wangari of Kenya who placed third to win the bronze.
The cash prize for the runners in the male and female category was the same as each of the gold medallists got $50,000; silver medallists $20,000, and bronze medallists $9,000.
After winning his race Mesfin said “I like Mountain Race and have been running; I thank God that last I have won this year’s Obudu Race.”
Projecting on what he will do with the cash prize of $50,000 Mesfin said, “I will use the money to buy house for my family because I am married with a child.”
The female champion for this year, Genet said she has never participated before in the Obudu.
Genet said the standard athletes that participated were very high, just as the organisation of the competition was of international standard.
Genet promised that she will defend her title next year when the 8th edition of the event would be staged.
Apart from the host country Nigeria, other countries that had their athletes participate in this year’s edition are Egypt, Kenya, Eritrea, Malaysia Ethiopia, Uganda, Turkey and the host, Nigeria .
Eighty –six international athletes participated in the race which attracted large number of spectators.
at November 29, 2011