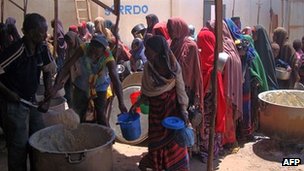 Al-Shabab fighters have closed down several aid agencies working in famine-hit Somalia, including some from the UN, accusing them of political bias.
Militants stormed aid offices in the towns of Baidoa and Beledweyne, which like many southern areas are controlled by al-Shabab, witnesses say.
Al-Shabab has long restricted the work of international aid groups but on Monday banned 16 groups outright.
Years of conflict mean Somalia is worst hit by the East African drought.
The lack of rain is said to be the worst in 60 years.
The list of groups banned outright included the United Nations children's agency, Unicef, and other UN bodies, the British charity Concern and groups from Denmark, France, Germany, Italy, Norway, and Sweden.
Unicef spokesman Jaya Murthy told the BBC a group of men, suspected to belong to al-Shabab, occupied their offices in Baidoa and ordered staff to leave.
"They just said they [Unicef staff] should go home immediately and our office is now their office," Mr Murthy told the BBC's Focus on Africa programme.
The al-Shabab statement accused the groups of exaggerating the scale of the problems in Somalia for political reasons and to raise money.
'Risk of death' It also alleges that the agencies are working with church groups trying to convert vulnerable Muslim children and opposing al-Shabab's attempts to impose Sharia law.

"Three armoured vehicles with gunmen surrounded the offices, including the office of [UN children's agency] Unicef," Baidoa resident Adulahi Idle told the AFP news agency.
"I saw many militiamen go inside the places and force the people there to leave and the men took control."
A senior al-Shabab official told the BBC that those groups which had been closed down had not carrying out many activities, and that the measures would not increase the suffering of ordinary people.
He also pointed out that three groups - the International Committee of the Red Cross, medical aid charity MSF and Italy's Copi - would still be allowed to operate.
Mr Murthy said Unicef was involved only in humanitarian work and al-Shabab's decision would threaten the lives of children.
"About 160,000 severely malnourished children are at imminent risk of death if assistance does not continue," he said.
The UN says the areas worst effected by famine are in the southern and central areas, which are under the control of the al-Qaeda linked group.
The UN-backed government only runs a few areas, including the capital, Mogadishu, which al-Shabab forces withdrew from in August.
Earlier this month, the UN said that famine conditions no longer existed in three of the areas previously worst affected - Bay, Bakool, and Lower Shabelle.
However, a quarter of a million people still face imminent starvation in the country, the UN says.
UN humanitarian affairs co-ordinator Mark Bowden told the BBC: "Somalia still remains the world's most critical situation."
Three other areas, including the squalid camps in the capital, Mogadishu, remain in a state of famine.
However, a senior aid worker familiar with the situation in Somalia who did not wish to be named told the BBC that the situation was still getting worse.
He said the UN could not admit this because it had to show the aid money was being well spent and having an impact.
Other aid workers have also warned that the situation could be worsened through conflict.
Kenya has sent troops into southern parts of Somalia, accusing al-Shabab of abducting Westerners from border areas - charges denied by the militants.
Tens of thousands of Somalis have fled rural areas - many over the borders to Ethiopia and Kenya - in search of food.
Somalia has not had a functioning central government for more than 20 years and has been wracked by fighting between various militias.
at November 28, 2011

Fantastic goods from you, man. I have keep in mind your stuff
prior to and you're simply extremely wonderful. I actually like what you've acquired right here,
certainly like what you're saying and the best way by which you assert it. You are making it entertaining and you still take care of to stay it wise. I can not wait to learn far more from you. This is really a wonderful web site.

I just could not go away your web site prior to suggesting that I really enjoyed the
standard info an individual provide on your guests?
Is gonna be again continuously to investigate cross-check new posts

Have a look at my weblog ... Sac Louis Vuitton Pas Cher

Hi, i read your blog from time to time and i own a similar one and i
was just curious if you get a lot of spam comments? If so how do you stop
it, any plugin or anything you can suggest? I get so much
lately it's driving me crazy so any support is very much appreciated.

It's amazing in support of me to have a website, which is helpful designed for my experience. thanks admin

This is a good tip especially to those fresh to the blogosphere.
Short but very accurate info… Thanks for sharing this one.

of course like your web-site but you need to test the spelling on several of your posts.
Many of them are rife with spelling issues and I to find it very bothersome to
tell the truth on the other hand I'll definitely come back again.

I used to be recommended this web site via my cousin.

I'm not positive whether or not this publish is written by means of him as no one else know such special about my trouble. You're
wonderful! Thanks!

Hello there! Would you mind if I share your blog with my twitter group?
There's a lot of people that I think would really enjoy your content. Please let me know. Thanks

I hardly leave a response, but i did some searching and wound up here "Somalia's al-Shabab militants close UN aid offices".

And I actually do have some questions for you if
it's allright. Could it be only me or does it appear like some of these remarks look as if they are left by brain dead individuals? :-P And, if you are writing at other places, I would like to keep up with anything fresh you have to post. Could you make a list of the complete urls of your public sites like your linkedin profile, Facebook page or twitter feed?

Spot on with this write-up, I truly feel this website needs much more attention.
I'll probably be returning to read more, thanks for the info!