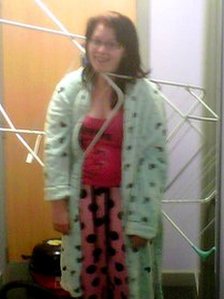 Miss Morgan said the clothes horse fell on her when she fell off the bed
A University of Derby student had to be cut free by firefighters after being trapped in a clothes horse for more than an hour.
Danielle Morgan said she had been "mucking about" in her flatmate's bedroom when the accident happened.
Friends and staff at Sir Peter Hilton Court hall of residence tried to free her before calling the fire service.
The 18-year-old said she had been left with bruising to her neck and shoulders but could now laugh about the accident.
Miss Morgan said: "My friends just thought it was hilarious.
"I found it funny at first but after it got taken off I had a panic attack and the ambulance came out."
Bolt croppers Derbyshire Fire and Rescue Service confirmed that they used cutting equipment to free Miss Morgan from the clothes horse.
Firefighters were called to Agard Street in Derby at 21:25 GMT on Sunday.
Miss Morgan, who is originally from North Wales, had fallen off the bed of her flatmate Lisa Smith, 18.
The clothes horse fell on top of her and her head went through the frame. 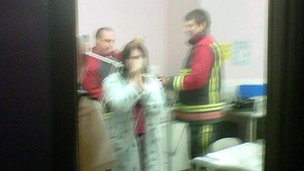