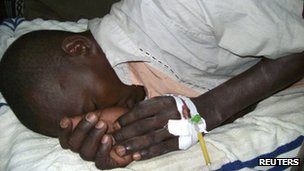 At least three people have been killed in explosions in eastern Kenya, officials have said.
More than 27 people were injured in grenade attacks in the town of Garissa, near the Somali border.
Earlier, a Kenyan soldier was killed by a bomb in the border town of Mandera.
Kenya ordered its soldiers into Somalia in October to crush al-Shabab rebels who it said had attacked its security forces and tourists inside Kenya.
One of the explosions killed two people in a hotel in Garissa, while another blast in the street killed a third, police sources said. Twelve people were seriously injured.
"Two people died at the new Holiday Inn known locally as Kwa Chege. Another died in a blast at Ngamia road," a police officer said.
Asked what caused the blasts, he said: "These were grenades", adding that most of the wounded suffered shrapnel injuries.
Local resident Hussein Abdi told AFP news agency there were scenes of panic in the centre of the town where the blasts occurred.
Garissa is the capital of Northeast province, 100km (60 miles) from the Somali border.

In Mandera, a Kenyan soldier was killed and at least four others wounded after their truck hit a landmine near the Somali border.
The explosions are the latest in a series of attacks in the region since Kenya sent troops into Somalia last month.
The Kenyan troops were tasked with establishing a buffer zone following a string of attacks blamed on al-Shabab, which has links to al-Qaeda.
The incidents included the abductions of four foreign women, one of whom subsequently died.
at November 24, 2011

Greate pieces. Keep writing such kind of info on your site.

Im really impressed by it.
Hey there, You've performed a great job. I'll definitely digg it
and personally suggest to my friends. I am confident they'll be benefited from this web site.

I have been exploring for a little bit for any high-quality articles
or blog posts in this kind of house . Exploring in Yahoo I
ultimately stumbled upon this web site. Studying this information So i am satisfied
to show that I've a very good uncanny feeling I found out exactly what I needed. I such a lot surely will make certain to don?t disregard this web site and give it a look regularly.

Have a look at my blog; http://www.nsppf.org.uk/wikka/KristyqvPardoeo

Hello, I enjoy reading through your article. I wanted to
write a little comment to support you.