Tonny Ndungu 1 hour ago 3265
– A 52-year-old Nakuru school teacher has  regained her eyesight after three years of blindness
– She was in class teaching when  everything suddenly went black
– She was diagnosed with a hysteric condition and advised to rest with the assurance that her eyesight would be restored- it never did for  three years later
A 52-year-old mother of two and school teacher Tabitha Maina has regained her eyesight after three years of blindness.
READ ALSO: This woman is like Jesus to the dying and forsaken by parents hospice babies
She went blind three years ago while teaching students at the Ndarugo primary school in Nakuru.  She was correcting  her students books when everything went black. She was was rushed to the Egerton University hospital for treatment.
She was diagnosed with a hysterical condition and advised rest with the assurance that her sight would be restored.  Unfortunately, she did not get her eyesight back.  Her life as she knew it, took a downhill spill.
READ ALSO: Why Classic 105’s Larry Asego was forced to apologise to single mothers
She sought specialized care at the Rift Valley General Provincial hospital but no ailment was detected.  It was the same story when she sought prognosis at the Kikuyu hospital. 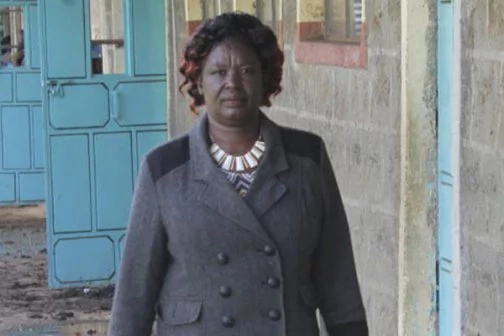 A 52-year-old mother of two and school teacher Tabitha Maina has regained her eyesight after three years of blindness. Photo Source: Standard.co.ke
At the Kenyatta National hospital, she was referred to a neurologist for specialized check-ups but gave up the chase as she didn’t have the money for it.
Her life worsened when she could neither work nor perform her duties as a wife and a mother. Her husband despite the tragedy,  remained supportive throughout the hurdles even at the time when she could not take a shower by herself.
With the help of the Distric Human Resource officer, she was able to enroll in a special school. She learnt how to use a white stick, the braille and resigned to fate.
READ ALSO: See leaked photos of Aden Duale’s multi-million Kiambu home
She graduated from the Machakos School for the blind after a six-month course and was re-posted to her former school as a special teacher.
In March 2016, while at a prayer service, her eyesight came back.  No ophthalmologist has been able to explain her ‘miracle’.
Maina no longer needs help moving around. She can use the chalk board and no longer uses the braille or the walking stick. While speaking to Standard, she said that she had learnt how to make the best of whatever circumstances that she may find herself in.
Cover Image: Standardmedia.co.ke
at June 30, 2016