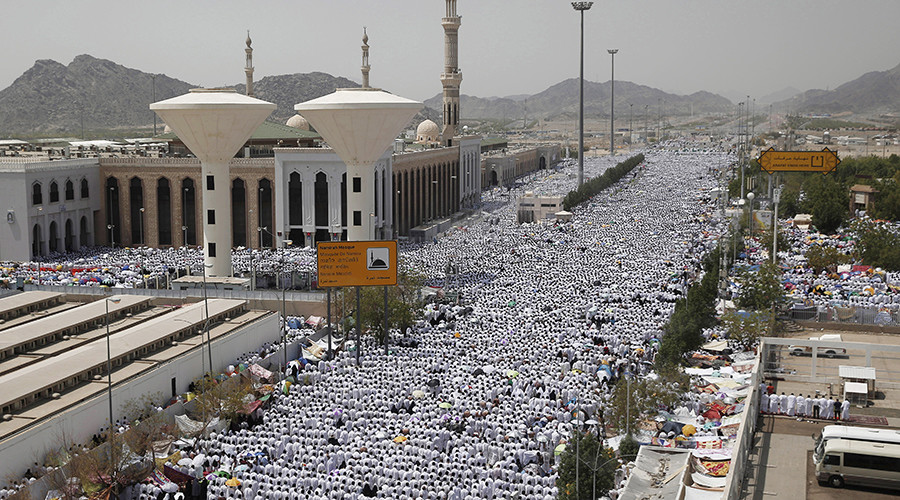 FILE PHOTO: Muslim pilgrims perform prayers in Arafat during the annual haj pilgrimage, outside the holy city of Mecca September 23, 2015 © Ahmad Masood / Reuters
9594
A top Saudi cleric declared that Iranians are “not Muslims” after Iran’s Supreme Leader Khamenei slammed Saudi Arabia for poorly managing the hajj pilgrimage, saying the country had virtually “murdered” the Muslims who perished in last year’s stampede.
“We must understand these are not Muslims, they are children of Magi and their hostility towards Muslims is an old one. Especially with the people of Sunna,” Grand Mufti Abdulaziz al-Sheikh said in comments to the Makkah newspaper, adding that Khamenei’s remarks did not surprise him. The term “Magi” refers to Zoroastrianism – a monotheistic religion older than Islam that was once dominant in Persian lands before the Arab conquest.
The hajj is a religious pilgrimage to Islam’s most holy sites that every Muslim is obligated to undertake at least once in their lives. In the deadliest incident of its kind on record, some 2,426 people were killed in a stampede Mecca’s Mina neighborhood as they were making their hajj in September of last year. While the cause still remains unclear, the tragedy has further exacerbated long-standing animosities between regional archrivals Saudi Arabia and Iran. Tehran claimed that 464 of those killed were Iranian, while blaming the calamaity on Saudi mismanagement. Iran has repeatedly demanded that an independent body take over management of the five-day event, but the Saudi authorities have refused to consider the proposal.
On Monday, Iran’s supreme leader Ayatollah Ali Khamenei accused Saudi authorities of “murdering” Iranian pilgrims.
“They murdered them,” Khamenei wrote in an emotionally charged statement on his official website.
“The heartless and murderous Saudis locked up the injured with the dead in containers – instead of providing medical treatment and helping them or at least quenching their thirst,” the leader stated, though he offered no evidence to support his allegations. He also accused the Saudis, who he called “small and puny satans,” of “treason” for failing to provide sufficient security for the hajj, saying they had been too busy catering to the United States to arrange it.
“Saudi rulers… are disgraced and misguided people. [They] tremble for fear of jeopardizing the interests of the Great Satan, the US,” Khamenei wrote.
Read more 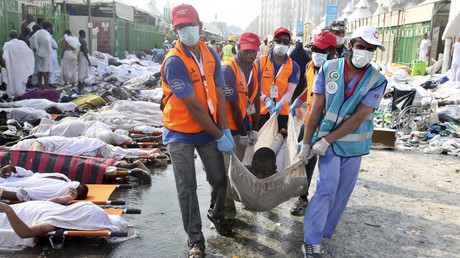 2,400 pilgrims died in Mecca’s Hajj stampede, three times Saudi official toll – report
“Because of Saudi rulers’ oppressive behavior towards God’s guests, the world of Islam must fundamentally reconsider the management of the two holy places and the issue of hajj,” Iran’s leader suggested.
Saudi Arabia’s crown prince and interior minister, Mohammed bin Nayef, said that Iran was merely trying to “politicize” the hajj, while warning that the agitation could compromise the safety of pilgrims.
“The Iranian authorities don’t want the Iranian pilgrims to come here for reasons concerning the Iranians themselves,” Saudi state news agency SPA quoted the crown prince as saying.
“Seeking to politicize hajj and turn it into rituals against Islam’s teachings [compromises] the safety of hajj,” he stressed.
The crown prince dismissed Khamenei as lacking credibility and objectivity, stressing that the Saudis have never treated Iranian pilgrims any differently than the other pilgrims, while Iranian pilgrims do not always respect the rules of hajj.
“[They use hajj] to violate the teachings of Islam, through shouting slogans and disturbing the security of pilgrims,” he noted.
Bin Nayef stressed that the Saudis consider it their sacred duty to provide all of the pilgrims “with all safety and security.”
After two failed attempts to resolve the safety issue, Iran banned its pilgrims from attending this year’s hajj for the first time in almost 30 years. Nonetheless, there are many Iranians among the over one million pilgrims that have already arrived in the Gulf state for the hajj starting Friday, the Saudi Minister of Hajj and Umrah said, according to Aawsatnewspaper.
Meanwhile, Saudi Arabia has been gearing up for the event, fearing a repeat of last year’s tragedy. This year, Muslim pilgrims will all have to wear electronic bracelets containing personal and medical information, while additional security cameras have been installed along the hajj route. In addition, Crown Prince bin Nayef has warned that more severe punishments await those who disturb the proceedings.
at September 06, 2016