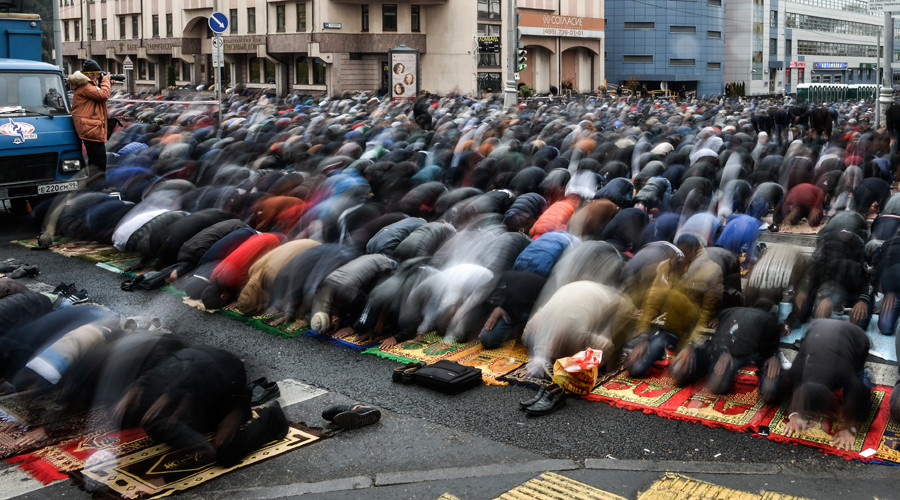 Muslims pray at the Festival of Sacrifice Eid al-Adha outside the Jameh Mosque, Moscow. © Vladimir Astapkovich / Sputnik
916
An activist has appealed to the Russian president and prime minister to make the two major Muslim holidays official paid days off, claiming that otherwise the nationwide celebration of Christmas can be viewed as discrimination.
Private citizen Yury Kurbanov published a petition with this request on the change.org website and the initiative is gaining popularity. In the message, he says he is acting “on behalf of all Russian Muslims” who, according to his estimation, make up to 20 percent of the population.
READ MORE: Chechen leader praises Putin’s bill protecting holy books from extremism probes
Kurbanov notes that currently many Muslims are moving from territories where Islam is a traditional religion to other regions of the Russian Federation. Kurbanov then points out that Orthodox Christmas is currently an official paid day off in Russia, despite the fact that it is celebrated only by Russian Orthodox Christians.
Kurbanov wants the authorities to add two major Muslim holidays – Eid al-Adha and Eid al-Fitr - added to the federal list of paid days off, saying that otherwise Muslims who live outside the traditionally-Muslim jurisdictions cannot wholly dedicate themselves to celebrations as required by their religion.
Currently Muslim holidays are declared paid days off in such Russian regions as Crimea, Bashkortostan, Adygeya, Dagestan, Ingushetia, Chechnya and Kabardino-Balkariya.
Also, the predominantly Buddhist republics of Buryatia and Kalmykia have days off on the Buddhist New Year and the republic of Sakha-Yakutia has an official day off on the pagan midsummer holiday of Yhyakh.
This is not the first time representatives of Russian Muslim community have sought recognition of their holidays at a federal level. In 2008, a similar request was made by the head of the Muslim Cultural Association, Mukhamed Salyakhetdinov, and in 2011, by the head of the Republic of Bashkiria, Rustem Khamitov.
Currently the Russian law recognizes nine official nationwide holidays, including Russian Orthodox Christmas celebrated on January 7. However, every year the government passes a separate decree on days off, often combining several dates into short periods of nationwide vacations. For example, in 2017 the New Year and Christmas vacations will last from January 1 till January 9.
READ MORE: Russia is not an enemy of Islam – senior Muslim cleric
It should be noted that Russian authorities are not legally bound to consider any petitions launched through US-registered platform change.org. Russia also has an official website for petitions called ‘The Russian Public Initiative’. Unlike change.org, it requires registration and allows only Russian citizens to leave signatures under pleas, but once a petition on the platform gets 100,000 signatures the parliament is legally bound to consider the document.
at September 06, 2016