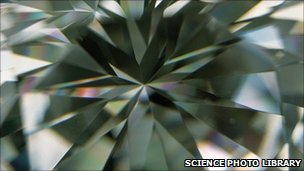 Zimbabwe has controversially been given the go-ahead to sell diamonds from its rich Marange mines.
The industry's leading certification system, known as the Kimberley Process, was split over the decision.
Participating civil society groups, worried about the effects of so-called blood diamonds, say Zimbabwe's human rights failings have been ignored.
The Marange fields in the east of the country have been described as the richest diamond find of the decade.
An inspection team from the Democratic Republic of Congo, the current chair of the Kimberley Process, found that Zimbabwe did meet the minimum necessary standards.
Its statement at the close of a meeting in DR Congo said Zimbabwe could start selling diamonds from there again, but insisted on continued monitoring.
Human rights groups say local people have been forced to work in the diamond fields, smuggling is rife and some mines in Marange are controlled by Zimbabwe's military, who channel some of the funds to President Robert Mugabe's Zanu-PF party.
The Zimbabwean authorities deny the charges.

"We want to be treated like any other country. I'm going to sell our diamonds now," Zimbabwean Mines Minister Obert Mpofu told the Reuters news agency.
Dissenting representatives from civil society groups walked out of the Kimberley meeting before the final statement, saying the values of the organisation were being undermined.
The new ruling is a relaxation of the Kimberley Process decision in July 2010 to allow limited diamond exports from Marange to resume.
at June 24, 2011

I got this site from my buddy who informed me regarding
this website and now this time I am browsing this site and reading very informative
posts at this time.

My relatives every time say that I am wasting my
time here at web, except I know I am getting experience all the time by reading such fastidious articles.

It is appropriate time to make some plans for the future and it's time to be happy. I have learn this post and if I may I want to recommend you few fascinating things or suggestions. Maybe you can write next articles referring to this article. I want to learn even more issues approximately it!

The players would begin as members of the SCA, going to Phoenix for the Estrella War.
Unfortunately for me as an addict, I need my crime
fix. The game would begin with them watching the collapse
of society and the outbreak of magic around the world.

The only hurdle to accessing this is of course human limitations and the fact that the brain does not function solely as a
learning tool for the human being. At the end of each round read out the cumulative scores.
8.

The only hurdle to accessing this is of course human limitations and the fact
that the brain does not function solely as a learning tool for the human being.
I believe my exact words were "I don't want to be your dirty little secret. The food is decent and the drink specials on Tuesdays include $2.

squares with various tea leaves and tea flavors inside each square.
This was zero cost because the students went to local stores and asked for either donations
and gift cards to purchase these items. Every Halloween party that people remember later in the year by saying things like "Do you remember so-and-so's Halloween party last year.

Here is my web-site - auto trader

In that case, this kind of question should not be
taken from any show telecasted in specific country. Anna had been looking through my phone
while I was naked. The food is decent and the drink specials on Tuesdays include $2.

The players would begin as members of the SCA, going to Phoenix for the Estrella War.
At the end of the party all of the papers write down who they think was the prohibition agent.
That is the new craze in on the internet gaming, and numerous girls and teens are possessing a blast.


Feel free to visit my page; www libero it

By dividing up the party at several peoples houses you make it easy on yourself.
Even Halloween parties with the very best Halloween costumes can get dry after
everyone's seen the costumes to be seen and passed out the candy to the beggars. Now, one of my co-workers was applying to the Secret Service and I knew that I was down as a reference for her.

Some were practical, of course, but others were psychological and emotional.
At the end of each round read out the cumulative scores.
28.

squares with various tea leaves and tea flavors inside each square.
You make different challenges like scavenger hunts, food challenges, mazes
and races. You Divide everyone at the party into two groups,
or tribes.

Have a look at my site; Tempurpedic

DJ spins out on Saturday nights. * Team answer sheets - Basically a grid lined A4 type sheet with answer write in numbered boxes
and a line on top for the team name. 8.

In that case, this kind of question should not be
taken from any show telecasted in specific country.

I believe my exact words were "I don't want to be your dirty little secret. 8.

Here is my website: easy pub quiz and answers

The only hurdle to accessing this is of course human limitations and the fact that the brain does not function
solely as a learning tool for the human being. Brazenhead
is a great place to go with your family or for a
business lunch or dinner, but if you are looking
for a party atmosphere, this isn't it. The decline of the East side blues scene was disheartening, but, it also gave rise to the need for a fresh start, which came in the form of the next blues-only venue, Antone's, founded by the late
Clifford Antone, during the summer of 1975.

Look into my web-site - pub quiz answers and questions ()