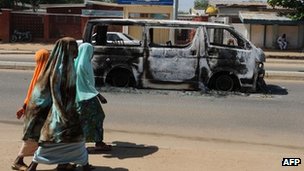 About 90,000 people have been displaced in clashes between militant Islamists and the security forces in Nigeria's Damaturu city, an official has said.
The Boko Haram group and troops were involved in heavy gun battles in the north-eastern city last week.
The militants also planted bombs in Damaturu and outside a church near the capital, Abuja, on Christmas Day.
Meanwhile, an explosive device was thrown into an Arabic school in the south of the country on Tuesday night.
At least seven children were wounded in the attack in Sapele town, police say.
The BBC Fidelis Mbah in the main city, Lagos, says it is not clear who was behind the explosion in Sapele, an oil-producing town in the Niger Delta.
On 10 December, a similar explosion happened at a mosque in the town, but it has raised fears about retaliatory attacks because of the Christmas Day violence, he says.
Continue reading the main story

I want to assure all Nigerians that there is no conflict between Muslims and Christians, between Islam and Christianity”

Muhammad Sa'ad AbubakarSultan of Sokoto
It is highly unusual for explosions to happen in residential areas in the Delta, a region plagued by conflict between the government and militants demanding a greater share of the region's oil wealth.
Some residents have blamed the attack on a dispute between rival Muslim groups, our reporter says.
On Tuesday, Nigeria's main Muslim cleric, the Sultan of Sokoto, denounced the Christmas day attacks and called for calm.
Nigeria - Africa's most populous country - is divided by rivalry between the predominantly Muslim north and the mainly Christian south, which also have cultural, ethnic and linguistic differences.
These divisions have sometimes erupted into violence, and many thousands of people have lost their lives.
'Fear camps'
Ibrahim Farinloye, north-east co-ordinator for Nigeria's National Emergency Management Agency (Nema), said an entire district in Damaturu - known as Pompomari - has been emptied because of the fighting last Thursday and Friday.
Continue reading the main story

"When there is insecurity, everybody runs for their lives. That area [Pompomari] is deserted," he told the BBC.
Many people had also fled their homes in the Jerusalem district to take refuge with family and friends in other parts of Damaturu or other towns and villages in Yobe state, Mr Farinloye said.
They had refused to move into camps for displaced people because they feared they would be easy targets for attackers, he said.
Hospital officials had reported that 28 people - including 16 civilians - were killed in the shoot-out between Boko Haram and the security forces, Mr Farinloye said.
Several homes also caught fire or were hit by stray bullets, he said.
Other officials said four people were killed in Damaturu in Christmas Day bombings, while a blast outside a church near Abuja claimed another 35 lives.
Boko Haram said it was responsible for the blasts.
The Sultan on Sokoto met with President Goodluck Jonathan for 90 minutes on Tuesday, to discuss the latest Boko Haram violence.
"I want to assure all Nigerians that there is no conflict between Muslims and Christians, between Islam and Christianity," Muhammad Sa'ad Abubakar told journalists afterwards.
"It's a conflict between evil people and good people. The good people are more than the evil ones, so the good people must come together to defeat the evil ones, and that is the message."
Boko Haram, which means "Western education is forbidden", wants the imposition of strict Sharia law in Nigeria.
The group carried out an August 2011 suicide attack on the UN headquarters in Abuja, in which more than 20 people were killed.
It was also responsible for a string of bomb blasts in Jos on Christmas Eve 2010.
at December 28, 2011