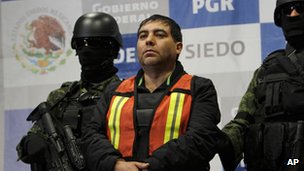 Mexican authorities have captured Felipe Cabrera Sarabia, the alleged security chief for the boss of the Sinaloa drug cartel.
Troops arrested Mr Cabrera in Culiacan, capital of Sinaloa state, defence officials said.
Army special forces also seized documents and computer equipment, AP reports.
More than 40,000 people have been killed in drug-related violence in Mexico since December 2006.
Since then, the government of President Felipe Calderon has been deploying the military to fight the gangs.
Mr Cabrera, known as "the Engineer", was brought before the media wearing a bulletproof vest at a news conference in Mexico City on Monday.
His capture "will affect the structure and leadership of the Sinaloa cartel", said army spokesman Gen Ricardo Trevilla, according to AP.
Mr Cabrera is believed by defence officials to have run operations for the Sinaloa cartel in the northern state of Durango and in part of the northern state of Chihuahua, as well as being head of security for the cartel's boss, Joaquin Guzman.
Guzman is thought to be a billionaire and has been on the run from authorities since escaping from prison in 2001.

The US authorities have placed a $5m (£3.25m) bounty on Guzman's head, alleging that he and his cartel control most of the cocaine and marijuana trafficked into the US from Mexico and Colombia.
Meanwhile, Mexican troops have discovered 13 bodies in an abandoned truck in the north-eastern state of Tamaulipas.
The area has seen violence between the Gulf and Zetas cartels, and messages alluding to the rivalry were found in the truck, justice officials said.
The murders are believed to be linked to a similar discovery last Friday in neighbouring Veracruz state.
On Thursday, various attacks on buses and on people in the town of El Higo in Veracruz left 11 dead.
at December 27, 2011