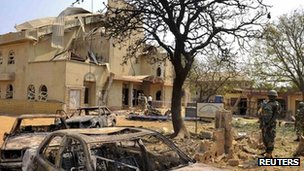 Nigerian Christians will have "no other option" but to defend themselves if attacks by Islamist militants continue, church leaders have said.
The Christian Association of Nigeria said the Boko Haram group had declared war with its recent violence.
More than 40 people were killed in attacks on churches in northern and central areas on Christmas Day.
Since then, some 90,000 people have fled their homes amid clashes between Boko Haram and police in Damaturu.
Earlier on Wednesday, six children and an adult were injured when a homemade bomb was thrown into an Islamic school in the southern Delta state.
A police spokesman said the bomb had been thrown from a moving car - it was not clear who was behind the attack, which has raised fears of retaliatory vigilante strikes.
BBC Africa correspondent Karen Allen says Africa's most populous nation and biggest oil producer faces the spectre of sectarian violence between the largely Muslim north and mostly Christian south.
Muslim leaders have, however, moved to downplay the prospect of communal clashes.
'Declaration of war'
"The consensus is that the Christian community nationwide will be left with no other option than to respond appropriately if there are any further attacks on our members, churches and property," said the leader of the Christian Association of Nigeria, an umbrella group of the country's churches.
Continue reading the main story

Ayo Oritsejafor was speaking at the St Theresa Church outside the capital, Abuja, where 35 people died in the Christmas Day bombings, the AFP news agency reports.
He said the attacks were "considered as a declaration of war on Christians and Nigeria as an entity," and that while he did not want to encourage acts of revenge, "Christians should protect themselves... in any way they can".
Mr Oritsejafor said the lack of response by Muslim leaders was an "abdication of their responsibilities", and that the Christian community was also "fast losing confidence in government's ability to protect our rights".
Nigerian President Goodluck Jonathan, who is a Christian, has held urgent meetings with Muslim and Christian leaders in an attempt to restore calm.
On Tuesday, Nigeria's main Muslim cleric, the Sultan of Sokoto, denounced the Christmas Day attacks and called for calm.
"I want to assure all Nigerians that there is no conflict between Muslims and Christians, between Islam and Christianity," said Muhammad Sa'ad Abubakar.
Boko Haram, which denies reports it has links to al-Qaeda, has said it carried out the Christmas Day attacks.
Last week, its militants were involved in heavy gun battles with government troops in the north-eastern city of Damaturu.
A state emergency management official said the clashes had displaced 90,000 people and that the entire district of Pompomari had been emptied as residents fled.
Boko Haram, which means "Western education is forbidden", wants the imposition of strict Sharia law in Nigeria.
The group carried out an August 2011 suicide attack on the UN headquarters in Abuja, in which more than 20 people were killed.
It was also responsible for a string of bomb blasts in the central city of Jos on Christmas Eve 2010.
at December 30, 2011