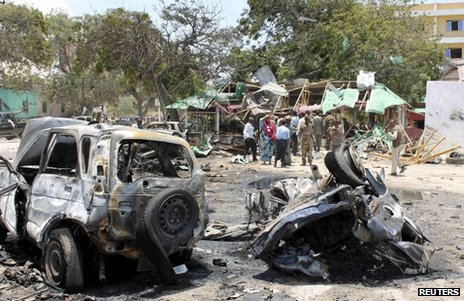 The Somali Islamist militant group al-Shabab has said it bombed a popular restaurant in the capital Mogadishu, killing 15 people.
The group said it had attacked the Village restaurant because it is frequented by Somali MPs.
Explosions ripped through the restaurant in the lunchtime attack, which apparently involved a car bomb and a suicide bomber.
The restaurant - near the presidential palace - was busy at the time.
It is a popular haunt of government workers and journalists.
Run by Somali businessman Ahmed Jama, who returned to the country from the UK in 2008, it was targeted by two suicide bombers last September in attacks that killed 14 people.
Mr Jama had just left before the bombing, and told BBC News: "I won't let this stop me. I will start the clean-up tomorrow."
'Savagery'

Local reports suggest a car bomb was detonated outside the restaurant, and that a suicide bomber then blew himself up among the crowd that gathered at the scene.
The force of the blasts appeared to tear much of the roof off the restaurant, while numerous burnt-out vehicles could be seen in the vicinity.

The UN secretary-general's special envoy to Somalia, Nicholas Kay, said: "I am appalled by this act of savagery and condemn it in the strongest terms.
"I offer my sincere condolences to the families and friends of those killed and wish a speedy recovery to the injured."
The Village, about 1km (0.6 miles) from the presidential palace, is not within the city's security zone but is popular with journalists and those in political circles.
Since the overthrow of President Siad Barre in 1991, Somalia has seen clan-based warlords, Islamist militants and its neighbours all battling for control.
President Hassan Sheikh Mohamud took office a year ago in a UN-backed bid to end two decades of violence.
Although al-Shabab was pushed out of Mogadishu in 2011, they have frequently staged attacks in the city since then.
The group still controls large swathes of southern and central Somalia.
at September 07, 2013