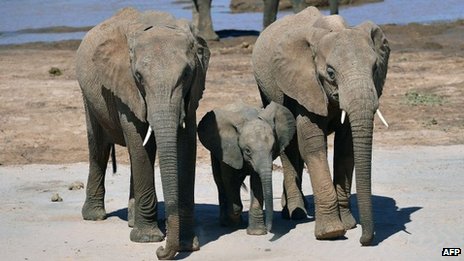 Poachers have used poison to kill 41 elephants in Zimbabwe's Hwange National Park, an official has told the BBC.
Zimbabwe Parks spokeswoman Caroline Washaya Moyo said it was suspected that cyanide was used to poison salt pans but tests are still being carried out.
She said it was Zimbabwe's worst case of elephant poaching.
There has been a rise in the killing of elephants and rhinos in parts of Africa in recent years, mostly to feed demand for horns and tusks in Asia.
The horns and tusks are used in traditional medicine in parts of Asia, even though scientists say they have no beneficial properties.
Five of the suspected poachers have been arrested, Ms Washaya Moyo told the BBC's Focus on Africa programme.
She said touching the poisoned carcasses posed a danger to any animal or human.
She said the Zimbabwe Parks and Wildlife Management Authority had reminded people who live near the park, in western Zimbabwe, not to eat the meat of any dead animals they find.
Some poachers were found with a large haul of tusks and cyanide earlier this year.
Two years ago, nine elephants, five lions and two buffalo were poisoned.
at September 07, 2013