Iceland has issued a red alert to aviation after indications of a possible eruption under the country's biggest glacier, the Vattnajokull.
The Icelandic Met Office warned that a small eruption had taken place under the Dyngjujokull ice cap.
Seismic activity is continuing at the Bardarbunga volcano, about 30km away.
Airspace over the site has been closed, but all Icelandic airports currently remain open, authorities say. A Europe-wide alert has also been upgraded.
European air safety agency Eurocontrol said it would produce a forecast of likely ash behaviour every six hours.
Iceland's Eyjafjallajokull volcano erupted in 2010, producing ash that severely disrupted air travel.
The red alert is the highest warning on the country's five-point scale.
Flooding threat

The Icelandic Met Office said a team of scientists was flying across the region on Saturday afternoon to monitor seismic activity.
"The eruption is considered a minor event at this point," police said in a statement.
"Because of pressure from the glacier cap, it is uncertain whether the eruption will stay sub-glacial or not." 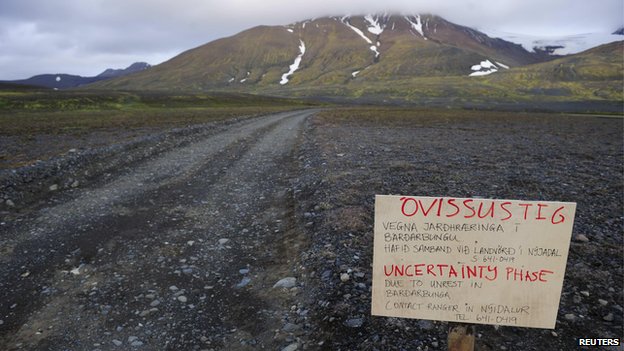 On Wednesday several hundred people were evacuated from the volcano area 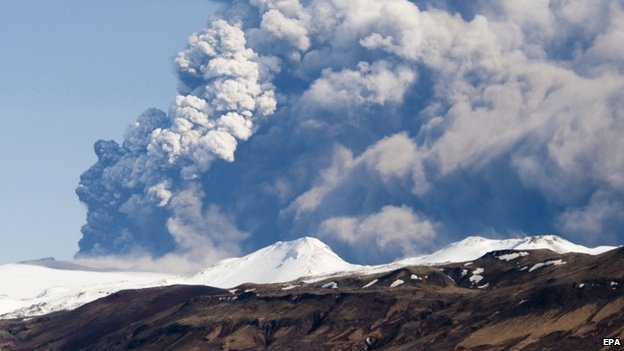 The eruption of Eyjafjallajokull in April 2010 caused the largest closure of European airspace since World War Two
The Met Office later issued an update saying that tremor levels had decreased during the afternoon but that earthquake activity was continuing.
Virgin Atlantic said it had rerouted a flight from London to San Francisco away from the volcano as a precautionary measure.
It said its other flights "continue to operate as normal".
British Airways said it was keeping the situation "under close observation", but that its flights were continuing to operate normally for now.
The UK Civil Aviation Authority (CAA) said there would be no impact on flights unless there was an actual eruption.
Bardarbunga and Dyngjujokull are part of a large volcano system hidden beneath the 500-metre (0.31-mile) thick Vatnajokull glacier in central Iceland.
Authorities have previously warned that any eruption could result in flooding north of the glacier.
On Wednesday, authorities evacuated several hundred people from the area over fears of an eruption.
The region, located more than 300km (190 miles) from the capital Reykjavik, has no permanent residents but sits within a national park popular with tourists.
The move came after geologists reported that about 300 earthquakes had been detected in the area since midnight on Tuesday.
The Eyjafjallajokull eruption in April 2010 caused the largest closure of European airspace since World War Two, with losses estimated at between 1.5bn and 2.5bn euros (£1.3-2.2bn).
Criticism following the strictly enforced shutdown resulted in the CAA relaxing its rules to allow planes to fly in areas with a low density of volcanic ash.
at August 23, 2014