Out of media player. Press enter to return or tab to continue.
Containing around 20 Iraqi families two weeks ago, a refugee camp in Syria has now swollen to hold around 15,000 people, reports the BBC's Paul Wood
Continue reading the main story

Militants in northern Iraq have massacred at least 80 men from the Yazidi faith in a village and abducted women and children, reports say.
Islamic State (IS) fighters entered Kocho, 45km (30 miles) from Sinjar, on Friday afternoon, reportedly telling men to convert to Islam or die.
The group's atrocities against non-Sunni Muslims have shocked the international community into action.
In New York, the UN Security Council imposed sanctions on IS members.
In another development, the US military said two of its drones had attacked and destroyed two vehicles identified as belonging to IS near Sinjar on Friday morning, after receiving reports from Kurdish forces that the militants were attacking civilians in the village of Kawju.
'Convert or die'
Kurdish officials confirmed the attack on Kocho after it was reported by Yazidi activists based in Washington.
"They arrived in vehicles and they started their killing this afternoon," senior Kurdish official Hoshiyar Zebari told Reuters news agency.
Jump media player
Media player help
Out of media player. Press enter to return or tab to continue.
The Yazidi community talks to the BBC about their escape from Mount Sinjar
The killings took place over the space of an hour, said a Yazidi MP, Mahama Khalil, who reportedly spoke to survivors.
A resident of a nearby village said an IS fighter from the same area had given him details of the bloodshed.
"He told me that the Islamic State had spent five days trying to persuade villagers to convert to Islam and that a long lecture was delivered about the subject today," said the villager. 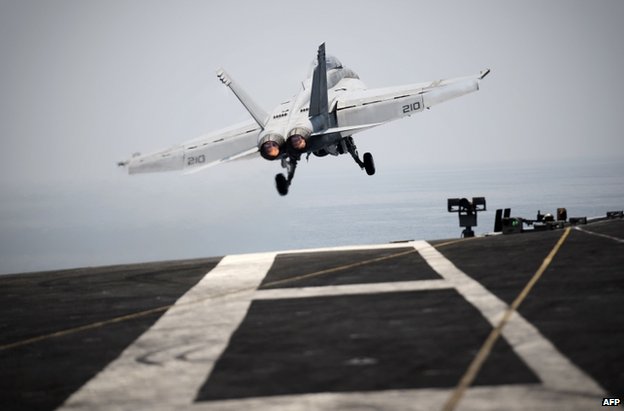 A US warplane takes off from the USS George HW Bush in the Gulf
"He then said the men were gathered and shot dead. The women and girls were probably taken to [the city of] Tal Afar because that is where the foreign fighters are."
Hadi Pir, a Yazidi activist and member of the Yazidi Crisis Management Team in the US, also said a deadline to convert had been given to the villagers.
The villagers were assembled at Kocho's only school, after which the men were shot, the activists said. Remaining villagers were then put on buses for an unknown destination.
IS-led violence has driven an estimated 1.2 million Iraqis from their homes. Whole communities of Yazidis and Christians have been forced to flee in the north, along with Shia Iraqis, whom IS do not regard as true Muslims.
Separately, fighting flared up on Friday in the mainly Sunni Anbar province, west of Baghdad, parts of which have been under IS control.
Sanctions
Some leaders of Iraq's Sunni Muslim minority have said they may work against the militants in cooperation with Iraq's new Prime Minister, Minister Haider al-Abadi, who is tasked with restoring order.
The mainly Shia Muslim government is locked in a fight with IS since the group led an insurrection in the north this summer, making the city of Mosul the capital of a self-declared state which extends into Syria.
Jump media player
Media player help
Out of media player. Press enter to return or tab to continue.
RAF crews gather intelligence in a mission over Iraq, as Jeremy Cooke reports
Yazidi and Christian people in northern Iraq have faced persecution by the jihadists, prompting US-led air strikes and aid drops and calls for other Western states to arm opponents of IS.
Meeting in New York, the UN Security Council made six people associated with IS or the Syria-based Nusra Front subject to an international travel ban, asset freeze and arms embargo.
Backers of the two groups may also face sanctions, they said.
At an emergency EU meeting in Brussels on Friday, the 28 member-states were left to decide individually whether they would arm Iraq's Kurds, the main opponent of IS in the north.
The UK said it would "consider favourably" any request to send arms to the Kurds, while the Czech government said it would be in a position to start deliveries of munitions by the end of the month.
Germany is legally prevented from arming countries involved in conflict, but Foreign Minister Frank-Walter Steinmeier said he would go to the limit of "what is legally and politically possible" to help the Kurds and he will travel to Iraq shortly.