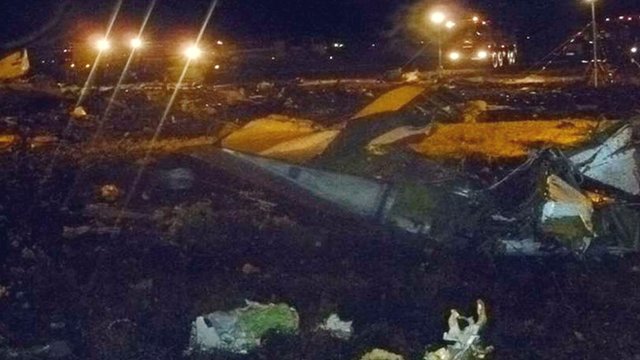 A passenger plane has crashed at an airport in the Russian city of Kazan, killing all 50 people on board, officials say.
The Boeing 737 had taken off from Moscow, and was reportedly trying to land but exploded on impact.
The Emergencies Ministry said there were 44 passengers and six crew members on the flight.
The plane belonged to Tatarstan Airlines, and crashed about 7:20pm local time (15:20 GMT) on Sunday.
Among the dead was Irek Minnikhanov, a son of the president of the Russian Republic of Tatarstan, according to a passenger list posted to Russian news websites.

The victims also included two children.
Russian President Vladimir Putin "expressed his condolences to the relatives of the victims in this horrible disaster", his spokesman Dmitry Peskov was quoted by the news agency Interfax as saying.
A government commission is being set up to investigate the cause, he said.
There were no immediate indications of what may have caused the crash, but reports said the pilot had already tried to land twice before - and crashed on the third attempt.
The airport in Kazan - the capital of Tatarstan - has been closed since the accident.
The BBC's Daniel Sandford in Moscow says that although some of Russia's biggest airlines now have very good reputations, frequent crashes by smaller operators mean the country has one of the worst air safety records in the world.
at November 17, 2013