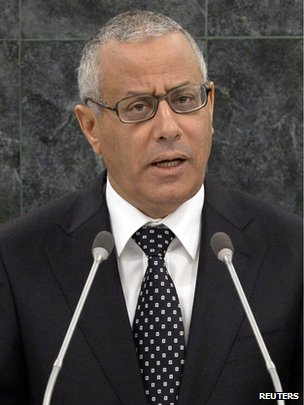 Ali Zeidan was elected as Libyan prime minister in October 2012, just weeks after failing to secure the chairmanship of the Libyan parliament, the General National Congress (GNC).
His predecessor, Mustafa Abu Shagur, had failed in two attempts to form a government acceptable to Congress, largely because opposition groups, including the Muslim Brotherhood and the secular National Forces Alliance, felt under-represented.
Mr Zeidan's broad-based interim government - which consists of a mixture of liberal figures and Islamists, and also aims to strike a balance between Libya's various regions - was officially inaugurated in November 2012.
Mr Zeidan, who is close to the National Forces Alliance of former Prime Minister Mahmoud Jibril, was a career diplomat who defected from Col Gaddafi in 1980 along with his former boss and ex-GNC chairman Mohamed Magarief.
From 1982 to 1992, Mr Zeidan was a member of the opposition Libyan National Salvation Front, under the leadership of Mr Magarief.
The front was dissolved after the fall of Gaddafi and replaced by the National Front party.
During the 2011 civil war Mr Zeidan was the opposition National Transitional Council's main point of contact with the European Union, and is credited with winning the rebels recognition by several European countries.
Elected to the General National Congress as an independent, he beat the Muslim Brotherhood's Mohammed Harari to the premiership.
His interim government faces the challenge of uniting secular, regionalist and Islamic interests in support of a new constitution and parliamentary elections in 2013.
The government has also faced resistance to its efforts to rein in and disarm the former militia groups that helped to topple Muammar Gaddafi in the 2011 uprising and now control parts of the country.
On 10 October, Mr Zeidan was briefly seized in Tripoli by armed men belonging to a former rebel group loosely affiliated with the interior ministry, known as the Libya Revolutionaries Operations Room.
at November 17, 2013