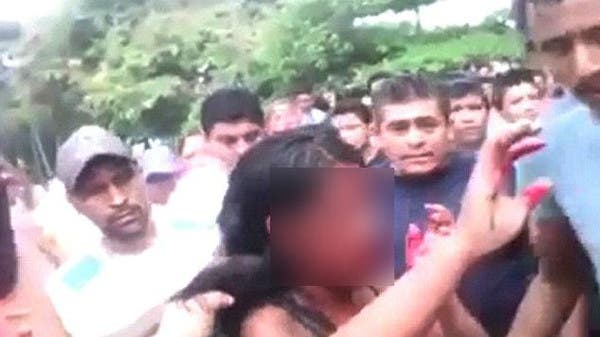 The girl seen surrounded by the mob, just moments before being set alight and killed (Image grab)
Text size A A A
Staff writer, Al Arabiya NewsSaturday, 23 May 2015
A 16-year-old girl has been beaten and then burned to death in the Guatemala by a lynch mob, who accused her of killing a taxi driver.
A video showing the grisly attack -which took place in a village - has been circulated across the small Central American country.
The mob beat the girl before dousing her petrol and setting her alight. After writhing in pain, the girl dies. In the video, young children and elderly women are seen looking on.
The girl was accused of being part of a group that killed a 68-year-old motorcycle taxi driver, Guatemalan news site Tiempo reported.
The group fled after the killing, according to the news site, but the girl was caught and then attacked by the mob.
A police spokesman said that officers had tried to intervene but were blocked by the crowd.
Lynchings are common in Guatemala, which struggles with corruption and gang-based violence. The country has the world’s sixth highest murder rate.
Last Update: Saturday, 23 May 2015 KSA 20:41 - GMT 17:41
at May 23, 2015