Appeals in India over Rajoana hanging 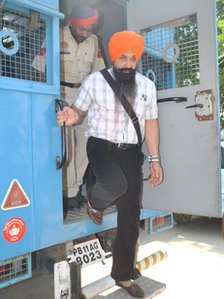 Efforts have intensified in India's Punjab state to save Balwant Singh Rajoana, a prisoner on death row for his role in the 1995 murder of then state Chief Minister Beant Singh.
Chief Minister Parkash Singh Badal is due to meet President Pratibha Patil to seek clemency for Rajoana.
Several opposition parties and Sikh groups have called a strike demanding a halt to the impending execution.
A Chandigarh court on Tuesday ordered the hanging to take place on Saturday.
Rajoana, who was sentenced in 2007, has not appealed against the sentence, although other convicted co-conspirators have had their death sentences reduced on appeal.
If carried out, the execution would be the first in India since 2004.
Tight security Speaking to reporters, Mr Badal said he would meet President Patil and Prime Minister Manmohan Singh on Wednesday and seek clemency for Rajoana.
"I will tell the president that the legal process is still on and request that the hanging be deferred. Law must be followed in the country," he said.
Punjab's Advocate General Anupinder Singh Grewal said the government would appeal to a higher court to stop the execution.
Meanwhile, security has been tightened across the state with paramilitary troops carrying out marches across various town and cities to ensure peace.
Patiala Central Jail, where Rajoana is being held, has been turned into a fortress and all roads leading to the prison have been barricaded.
On Tuesday, the superintendent of Patiala Central Jail Lakhwinder Singh Jakhar told the court that he was unable to carry out the sentence because a mercy petition for Rajoana and another man convicted in the case were before the president.
A rights group has also appealed to the Supreme Court to stay the execution.
The family of Beant Singh has also said it has forgiven Rajoana and would like his death penalty commuted to life in prison.
Only the president or the Supreme Court can stop an execution.
Beant Singh was killed on 31 August along with 17 others by a suicide bomber identified as Dilawar Singh. Rajoana was convicted of acting as a back-up suicide bomber should Singh have failed.
Executions are rare in India where hundreds of convicts are awaiting the death penalty, including the killers of former prime minister Rajiv Gandhi.
Pakistani national Mohammad Ajmal Amir Qasab - the sole surviving gunman of the 2008 Mumbai attacks - is also on death row. The Supreme Court has stayed Qasab's execution while an appeal is considered.
at March 28, 2012